Jodi McKay:‘The thing I love about Greek people is that there is an enthusiasm for their culture’ 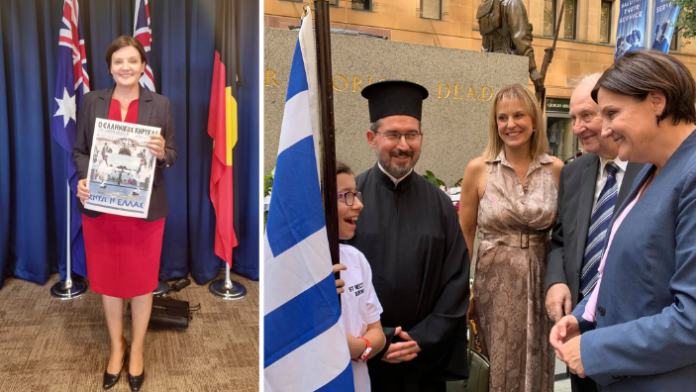 It took the Greek community almost three months to convince the NSW government that the 200th Anniversary of the Greek Independence is a worthy cause for the colours of the Greek flag to be projected on the sails of the Opera House and NSW Opposition Leader, Jodi McKay, played a pivotal role in this historic moment for Hellenism.

Passionate about multiculturalism and a Greek at heart due to her lengthy involvement with the Greek community in her electorate of Strathfield, Jodi McKay welcomed The Greek Herald at her office and with a smile and a sense of philoxenia, shared her thoughts on the need for more diverse voices in Parliament, women in politics and her will to lead a party that “puts people first.”

“The Greek War of Independence is a significant milestone”

I ask her why she supported the Greek community in its calls to light up the sails at the Opera House on Thursday March 25, and she says that “Independence Day occurs every year, but not 200 years of independence. This is worthy of celebration.”

A few days earlier, McKay had written to the Premier after the request from the Member for Canterbury Sophie Cotsis, the Member for Rockdale Steve Kamper and Member of the Legislative Council Courtney Houssos in December were ignored.

“We were really pleased when the Premier decided to go ahead with this. Because the Greek community is very proud of the history that has led to independence, so this was a mighty and worthy celebration,” the opposition leader says.

Her love for the Greek community

As the state’s more than 130,000 strong Greek community lives and breathes in the rhythm of the Revolution bicentennial, McKay seems to be joining the celebrations and her presence at the community’s most significant events has been well received.

“There are many of us who are not Greek, but are very proud to represent the Greek community, like I am,” McKay said during a recent event hosted by the Consul General of Greece in Sydney and asked why she made this statement, she doesn’t hesitate to reply.

“I have a wonderful Greek community in my area of Strathfield, I do a lot of work with the older members of the community and I have a very strong relationship with St Nectarios.

“The thing I love about Greek people and particularly in my community is that there is a warmth and an enthusiasm for the culture but a deep appreciation of being here, in this country,” McKay says.

“I love the fact that particularly the older members of my community feel like almost the custodians of keeping not only the culture, but the desire to keep that going and I admire and appreciate that.”

The NSW opposition leader speaks fondly about her role as a shadow Minister for Multiculturalism and expresses her admiration for the communities that stepped up “where the government failed.”

“It’s been extraordinary to see the community rally. But this state didn’t do well with people who are on a visa, like our international students. I saw so many people, so many community groups step up where the government failed particularly during the height of the pandemic and provide food and financial support.

“Even in my community, St Nectarios established a kitchen where they would help people. I was very fortunate to help fund this,” says McKay also acknowledging the efforts of Premier Gladys Berejiklian.

“I think here in NSW we’ve had two things that worked really well. The quarantine system which has been strong and contact tracing. NSW is the very best in the world.

“I think that the Premier is a really hard worker and she’s had faith and a great response from government agencies. I think we have much to be proud of in NSW.”

McKay speaks openly about the challenges she faces as a female politician and recognises women in politics as “champions for change” under the current circumstances and the sexual abuse scandals.

“At the moment it’s a really difficult time for women not only in politics but everywhere. I’m so proud of women in this country, young and old, who’ve stepped up in an environment that has made it Ok to talk about consent and OK to talk about respectful relationships.

The opposition leader says that the Labor Party has done well when it comes to women.

“We have over 40% of our representatives who are women, we have introduced a set of rules in our party to ensure that women are promoted and are supported,” she says referring to the Premier.

“Politics is a tough game, particularly in NSW.

“We – Gladys and I – enter the “bear pit” every day. And it’s called the ‘bear pit’ for a particular reason. It’s robust and it’s rough.”

The need for diversity in Parliament

From women in politics back to multicultural communities and their representation to the state Parliament McKay doesn’t hide her words.

I ask her whether if the state Parliament represents its community.

“Diversity in all its forms -and not only women- is important,” she says and explains how she tries to motivate young students to step up during school visits at the Parliament.

A Leader born in rural NSW

Although McKay’s next appointment is already waiting outside, her eyes spark when I mention her upbringing in rural Australia.

“I am the first Labor Leader in recent memory that has grown up in rural NSW and I’m really proud of that,” she says.

I ask her to expand.

“Sometimes people have the view that the Labor party is about the city areas only. The Labor Party that I lead and I’m proud to be a part of, is the Party for everyone. I want people to know that we are there for everyone.

“When I grew up in a town of 2,500 people, I had values instilled in me by that community, in that community, that were rural values. I call them country values. Integrity and genuineness, honesty, a desire for hard work,” she says.

“When I was first elected as a Labor Leader, I didn’t go to Wollongong or Newcastle. I went to Cootamundra. Because Cootamundra is not where you expect a Labor leader to be, but people of Cootamundra should know the Labor Leader.”

“We have to get back on putting people first.”

I ask her for a message to the Greeks out there who might be reading this interview.

“I celebrate with you. I am proud to represent you and I hope one day I’ll be your Premier,” she concludes.