On this day in 1801, Lord Elgin removed and stole the Parthenon Marbles from Greece 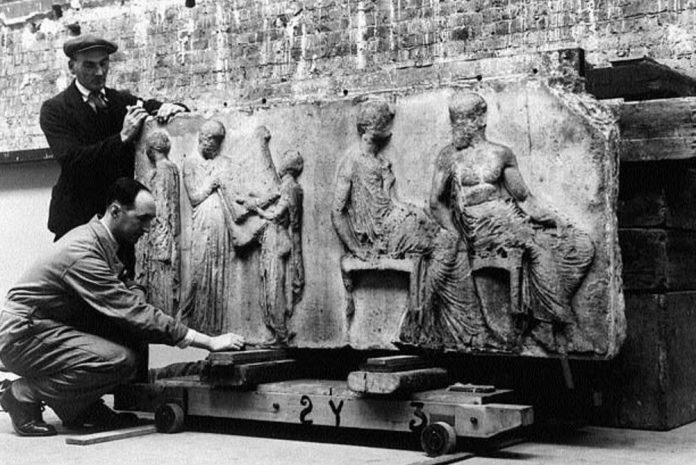 In the early morning light on July 31, 1801, a ship-carpenter, five crew members, and twenty Athenian labourers “mounted the walls” of the Parthenon and removed one of Greece’s most important pieces of history.

The Elgin Marbles formed part of the Parthenon, built under the supervision of the architect and sculptor Phidias and his assistants. The marbles accompanied the Parthenon, atop of the Acropolis, for over 2,200 years. Following the Ottoman occupation in Greece, Greeks would see the priceless artefacts sold off to various bidders in Europe.

Elgin claimed to have obtained in 1801 an official decree from the Sublime Porte, which approved his removal of the marbles. However, this firman has not been found in the Ottoman archives despite its wealth of documents from the same period and its veracity is disputed.

Within months, the workers had lowered dozens of additional marble sculptures, and within a few years, majority of the Parthenon’ priceless marbles were removed and sent to England.

The Parthenon Marbles acquired by Elgin include some 21 figures from the statuary from the east and west pediments, 15 of an original 92 metope panels depicting battles between the Lapiths and the Centaurs, as well as 75 meters of the Parthenon Frieze which decorated the horizontal course set above the interior architrave of the temple.

The legality of the removal of the marbles continues to be discussed today, with the Greek government demanding they be returned to their home in Athens.

In 2014, UNESCO offered to mediate between Greece and the United Kingdom to resolve the dispute, although this was later turned down by the British Museum on the basis that UNESCO works with government bodies, not trustees of museums.

The two countries ongoing dispute continues to impede Greece’s attempt to save the authenticity of their ancient history.