Greece affirms solidarity with diaspora in Ukraine amid tensions with Russia 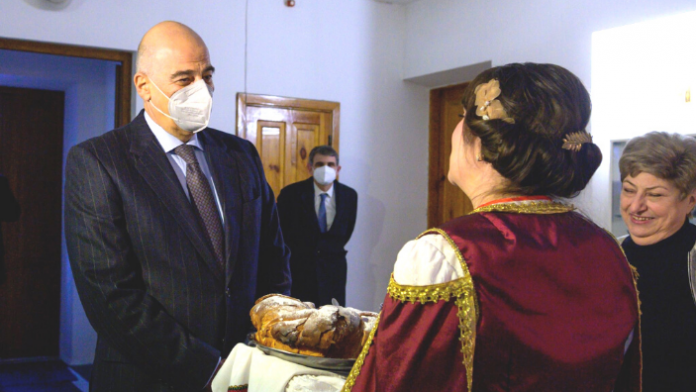 Greek Foreign Minister, Nikos Dendias, visited Mariupol and the village of Sartana in Ukraine’s Donetsk region on Monday to meet with the local Greek community.

The visit took place amid fears of a Russian invasion of Ukraine after Russian President, Vladimir Putin, deployed around 100,000 troops near the border with its former Soviet neighbour.

In a press release, Dendias said he visited the area, which is just a few kilometres from the line of tension, “in order to support with my presence, upon instruction from Prime Minister Kyriakos Mitsotakis, the Greek Community living here; a community numbering over 100,000 people.”

“Greece will always be on the side of diaspora Greeks, particularly at difficult times,” Dendias added in a tweet on Sunday.

Earlier that same day, Dendias also paid a visit to the Organization for Security and Co-operation in Europe (OSCE) Special Monitoring Mission. During the visit, he was briefed on the current security situation in the country and the Mission’s work.

The visit was praised by the outgoing United States Ambassador to Greece, Geoffrey Pyatt, who called it “an important and very welcome signal of support.”

To conclude his trip to Ukraine, the Greek Foreign Minister also spoke on the phone with his Ukrainian counterpart, Dmytro Kuleba, and expressed Greece’s support.

“Greece, out of principle, always supports the independence and territorial integrity of all states, in accordance with the principles of International Law and the United Nations Charter,” Dendias said in a press release.

“I would like to express the hope that the tension which currently exists will not continue, that the situation will return to calm and de-escalation.”