‘I sacrificed a lot’: Athena Field on her journey to winning TAFE NSW’s ‘Student of the Year’ 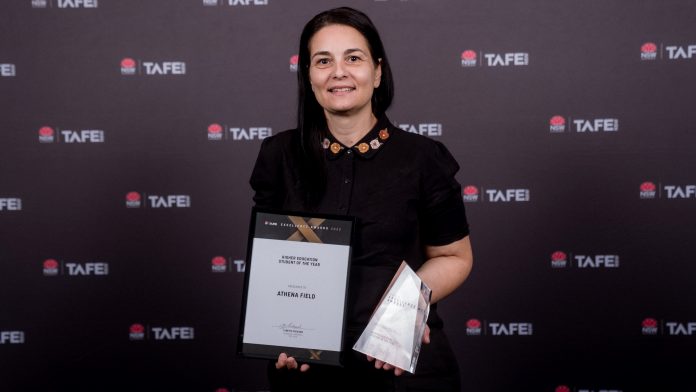 Like many people in the same situation, Athena Field wasn’t in a position to start her tertiary education straight after high school due to family care commitments.

But while life’s circumstances seem to have impacted Athena, she was still determined to finish her Bachelor of Community Services at TAFE NSW while also supporting her family.

This hard work and dedicated led to Athena being named the TAFE NSW Bachelor of Community Services ‘Student of the Year.’ To celebrate this recognition, The Greek Herald spoke with Athena to find out more about her.

I am a first generation Greek Australian. My dad was from Thessaloniki and my mother is from Thessalia. They both migrated to Australia in the late 1960’s, where they met, married and not long after, had me in 1973.

I’m now 49 years old, married to an Australian and we have a 12-year-old son. My family moved around different suburbs growing up, predominantly around the south west Sydney area, but I now live and work in the Campbelltown area.

I completed my first tertiary qualification in 1994 with a Diploma in Social Science and I starting working in youth work at a crisis refuge in Kings Cross, supporting homeless and disadvantaged young people. I have worked in community services for 27 years in the youth work, community development and adult mental health sectors.

In 2014, I was awarded the NSW Government Lifetime Achievement in Youth Work and I now work as a Practice Lead in Peer Support with Wellways Australia. I utilise my own mental health challenges to inspire hope and recovery for other people with a lived experience.

I decided five years ago to undertake a degree level qualification as I did not have the opportunity to study at university after I completed high school. I was a young carer for my father who had experienced both physical and mental health issues.

I instead worked and helped my family financially. The degree was to build my knowledge and skills in the industry and I have always appreciated continued study as part of developing my career. At this time, TAFE NSW had introduced degrees to their offering and the Bachelor of Community Services was the right course for me.

It took me four years to complete it part time whilst I also worked and was the primary parent for my son. Within that time, I had won two awards in Academic Achievement, as well as supported other students with tutoring and their career development. As a result, I was nominated by the Course Coordinator and this year, I was awarded the Student of Year in Higher Education.

I felt thrilled that my hard work over the years had been recognised and appreciated. I sacrificed a lot during my study such as social gatherings and spending time with my friends and family.

I felt that I had finally achieved a major goal that I had wanted to accomplish for most of my life. I am the only person in my immediate and extended family to achieve a degree.

4. What would you like to say about your win?

I believe that a tertiary education can be achieved by anyone as long as the initiative and passion is apparent. You don’t need to go to university straight out of high school. It can be completed at any age.

I have made many members of my family proud and I hope to inspire other people in how I was able to balance study, work, social and family.