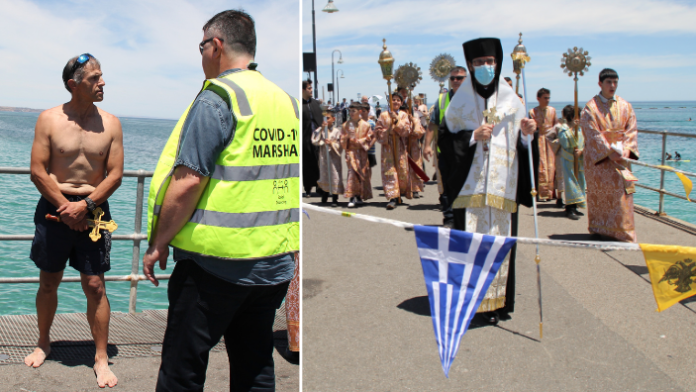 It was an eventful afternoon for faithful and attendees of the Annual Blessing of the Waters held in Glenelg, South Australia on Sunday.

“I understand that there was a competition for the cross today but in two forms. A lawful one and an unlawful one,” Bishop Silouan of Sinope told the crowd after it was made clear that the man who reached the cross first had not registered and was already in the water and not at the shore with the other swimmers.

The man, who later identified himself as ‘Victor’ refused to hand the cross to the priests and was later escorted off site by a police officer for questioning.

During the negotiations, church representatives and the priests were urging the police for the matter to be resolved peacefully.

The cross was returned to the church later during the day.

According to an announcement published on the Greek Orthodox Archdiocese of Australia (Archdiocesan District of Adelaide) social media pages on Sunday evening, Andreas Pavlou, the official winner of the Epiphany ceremony, will be presented with his award on Sunday, 17 January.

Speaking to The Greek Herald, Mr Pavlou said he feels blessed to be the winner.

“I was very pleased and excited when I was announced the winner. It was my fifth time going for the cross and I gave it my all and tried my hardest to get the cross. I feel very blessed”.

Although it was a first for Adelaide, a similar event unfolded last year in Port Melbourne’s ceremony when an interloper reached the cross before the 25 registered swimmers.