Theo Maras: ‘Who you are is measured by what you will leave behind’ 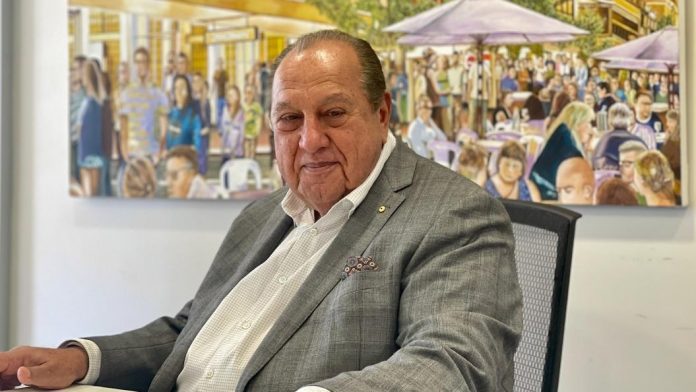 As we walk down the laneways in Adelaide’s cosmopolitan East End, property developer and Adelaide Central Market Authority, Theo Maras gives me a tour of the place that his family owns and has transformed over the last three decades.

“I am proud of what we have done. There was nothing here,” says the Chairman of Maras Group, showing me proudly around as he orders his usual coffee and a glass of water with a slice of lemon at the Ebenezer Place French Brasserie.

We talk about his recent fireside chat with Jessica Adamson at one of Business SA’s pre-election luncheons where with yet another of his frank speeches he made a poignant reminder to the attendees that “politicians work for us” and was praised “for the work and leadership he has shown during the COVID pandemic, in helping both his tenants and the business community at large.”

He chats briefly with the brasserie’s French owner about the challenges he faces in finding qualified staff and greets by his name the kitchen hand who enters from the back door with his hand full of baguettes.

Maras is known as a landlord who dines in the cafes, knows the staff and enjoys the shops in the street he virtually owns.

He says when COVID hit he felt anxious for his over one hundred tenants and the young workers who would not be able to make ends meet.

“I felt depressed for young people who had to close their businesses, not because they would not be able to pay rent for the shops. I was more worried about how they would pay their house rent and feed their families, how they would pay for fuel,” Maras, 73, says.

“It brought to me memories from my childhood when we had nothing. I was lucky enough back then to have three jobs to work and help my family. Now it’s even hard to find a job.”

He migrated to Australia from the Greek island of Ikaria in 1952, at the age of four following his grandfather who himself had moved to the country in the late 1920s to escape war-torn Europe and poverty and he has been working non stop ever since.

When the pandemic hit South Australia nearly two years ago, Theo Maras says that together with his son Steve, who is the Managing Director and CEO of the Group, decided -in a nationally first initiative- to freeze the rent for all their tenants.

“The very first thing we did, with no support from the government or anyone, was to let our tenants know that they did not have to pay rent for as long as their doors were closed. How could we ask for rent from people who have been with us for 25 years? We could survive.”

What sets him apart from other developers is his interest in the city, its long-term economic future as well as the wellbeing of the community.

“After three months, things opened up for businesses. When the restrictions eased and restaurants were able to allow more punters, they started paying their rent according to their capacity.

It’s not strange that during one of the most challenging periods for South Australia and the economic upheaval the Marases not only survived but thrived like they have done in the past with the recession of the 1990s, and later the financial crisis and rise of online shopping in the 2000s.

“We are full and where we had a few gaps, people came in because they know what we do and how we do it,” he says.

We talk about the increasing demand in housing in SA and the growing momentum in the state’s population and economy.

“Some years ago, we had people coming to South Australia from interstate. Now we’ve got people coming in from overseas wanting to live here and we have become the third best city in the world to live in.”

Recently, the prominent developer called on the state government to ‘put the politics aside’ and set out a new vision for future development across Adelaide with a holistic planning review.

“Whether you’re a family, a single person, a small family business or a corporation you can’t do anything without having an idea of what the government is going to do.”

“We have five big industries in South Australia. Education, tourism, agriculture, defence and mining. We have the education facilities so let’s organize them so we can train people up,” he says.

In the seventh decade of his life there are no signs that Theo Maras will slow down any time soon. To the contrary.

After the East End development and Rundle Mall rejuvenation he’s now on a mission to make the Adelaide Central Market one of the biggest and best in the world.

“When you consider what the icons are for the people in South Australia, Rundle Mall is first. The market is the second major icon.

“I am happy that I’ve been able to do three major projects that have left on the city. Let’s not be stupid. I’m proud for what I’ve done but I am most proud because I will leave something for my grandchildren and hopefully the next generation to be able to work with.”

Theo Maras feels strongly about the legacy he will leave for the next generation and his Greek heritage.

“I was always one of the people who wanted to do something for their family, their friends and ultimately their own good. Then I saw that I had the capacity and the will to do something about the wider community and for this country, this second home, that gave me opportunities to become who I am today.

“And who you are is measured by what you will leave behind. This is what matters.”

During our conversation Theo Maras had to pick up his phone two or three times. Every time he would change his voice in a humorous way.

“You need to have fun in life,” he says and reveals his next project.

“I want to create a National Centre of Languages in Adelaide as a collaboration project between the three South Australian universities to ensure that the language, history and culture of the migrants who helped build Australia will be remembered.”

At this point in our conversation, I realise that Theo Maras might indeed be a saint as depicted in a portrait of the recent Foundation for Hellenic Studies ‘By George!’ exhibition, although he does not consider himself one.

He carves out the future on passion, solid work ethic, knowledge, hands on experience and last but not least some gentleman core values that tend to be scarce these days.