‘A celebration of the Greek culture’: Foundation for Hellenic Studies launches inaugural exhibition 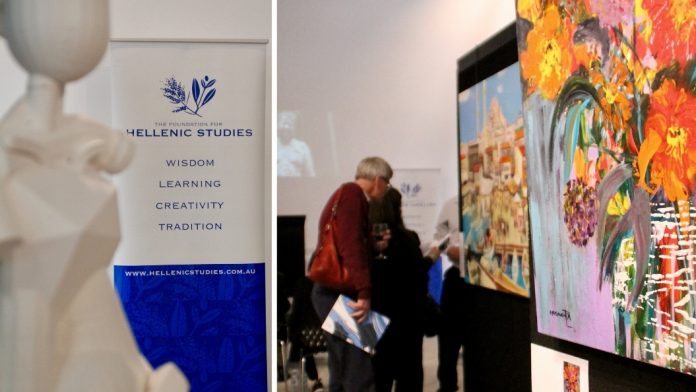 With an event held in Adelaide on the 81st Anniversary of ‘Oxi Day’ the Foundation for Hellenic Studies launched the By George! exhibition and announced the biennial art prize winners who were called to explore the theme ‘Independence. What is it good for?’

Attending the opening of the exhibition were the Consul General of Greece in Adelaide, George Psiachas; Labor MP, member for West Torrens, Tom Koutsantonis; Mayor of the city of West Torrens, Michael Coxon; Councillor and Chair of the South Australian Multicultural and Ethnic Affairs Commission (SAMEAC), Adriana Christopoulos, the Foundation’s board members as well as prominent members of South Australia’s Greek and wider community.

Addressing the attendees, the Consul General spoke about the importance of Art as a means of expression in the course of history while the Chair of the Foundation for Hellenic Studies, Greg Crafter, highlighted the importance of multiculturalism.

“We, in this country celebrate multiculturalism. We want the language and the culture to be entrenched and to be loved and lived by families. This makes our country stronger, more cohesive and it makes us appreciate other cultures. And if we can appreciate other cultures, we can stop fighting each other. More love, less wars, more understanding and a better world,” Mr Crafter said.

“Tonight, in a small but important way this is what we are celebrating. Bringing each one of you, your families and the broader South Australian community in touch with the Greek culture in this way.”

The inaugural art prize which aims to commemorate the bicentenary of the Greek War of Independence attracted registrations from around the world and over 50 entries which are being exhibited at Gallery 108 in Adelaide.

The winning entries as judged by a panel of experts comprised by Jason Karas, Diana Jaquillard, Fotis Kapetopoulos, Niki Sperou and Connie Augoustinos are the following: First Prize of $5,000 for a moving image artwork entitled ‘Wonnarua’ by NSW conceptual artist Ryan Lee, second prize of $ 3,000 for a recycles glasswork piece entitled ‘Syntagma Square’ by Canberran artist NOT and third prize of $1,000 for a piece entitled ‘Greek National Day’ by local artist Helen Kari.

A Democratic (People’s) Choice Award will also be awarded on Sunday 21 November and the winner will receive $2,000.

*The exhibition can be viewed by appointment at the popup Gallery 108 in the new Kyren Group development at 108 Wakefield Street Adelaide, on Friday evenings from 5 –7pm throughout November, and online at https://bit.ly/3DHRsoC. For more information visit the Foundation’s Facebook Page.