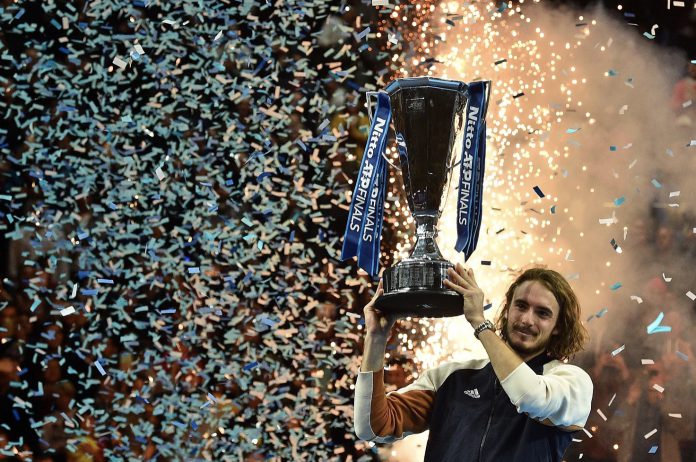 Stefanos Tsitsipas came from a set down to beat Dominic Thiem on a thrilling final-set tie-break and become the youngest winner of the ATP Finals in 18 years.

Winning the biggest title of his career on Sunday night Tsitsipas received a cheque of more than £2million ($2,656,000).

Thiem, 26, who edged a tight first set, fell away in the second and the start of the third before fighting back.

But Tsitsipas forced a tie-break, and then won it, at a raucous O2 Arena.

He collapsed to the floor after Thiem put a forehand return out on the first match point before the pair embraced at the end of a two-hour 35-minute battle, with the Greek kissing his beaten opponent on the shoulder.

“It’s been a roller-coaster. Holding this trophy is amazing,” the world number six said.

He had been the better player in the opening set only for Thiem to take it in on a tie-break but when the Austrian’s level dropped he was there to take advantage.

He did not panic and hit just one unforced error in the second set compared to eight from his opponent – going 4-0 ahead in 14 minutes and wrapping up the set soon after.

Tsitsipas’ entertaining game – full of powerful forehands, laser-like serving and a stunning single-handed backhand – improved further at the start of the third set and he looked set to power on to the title.

But Thiem, a two-time Grand Slam finalist, broke back and levelled as his crunching groundstrokes returned.

In the tie-break Tsitsipas saw a 4-1 lead become 4-4 before he held his nerve to take the match with three straight points.

Tsitsipas is the youngest winner of the season-ending championships since Australia’s Lleyton Hewitt in 2001 and the youngest debut champion at the eight-man event since a then 19-year-old John McEnroe won the title in 1978.