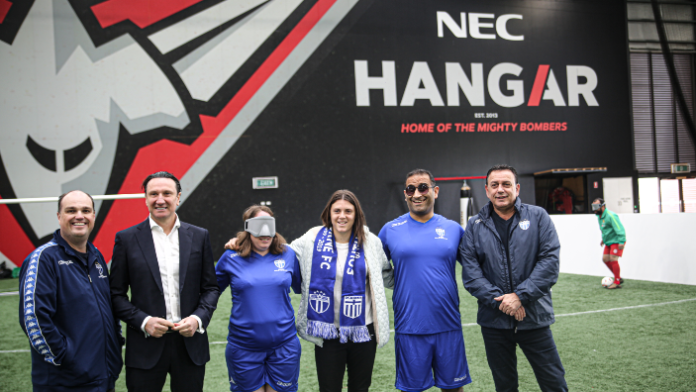 The journey to the Paris 2024 Paralympics kicked off last weekend for blind footballers in Australia with the launch of the National Para 5s Series.

The partnership between Australian Blind Football and Paralympics Australia will bring together the best blind footballers from around the country four times a year for national training camps. The camps, based in Melbourne, will feature players from five clubs, the largest of which is locals South Melbourne FC.

The South Melbourne FC all abilities football program commenced at the Albert Park based club in 2018 when Chairman Bill Papastergiadis signed off on the formation of a powerchair football team. Fast forward three years and the program has been expanded to embrace blind and vision impaired footballers.

“Our aim is to offer the most diverse and inclusive All Abilities Football program in Australia. Our program embraces footballers of any age, any gender, any culture and any ability. The announcement of the National Para 5s Series will enable our blind footballers to play for and represent South Melbourne on the national stage” Papastergiadis said.

The squad trains regularly in Albert Park under the guidance of coach Ankit Singh with the support of Australian Blind Football. The link between blind football and South Melbourne extends further with former club NSL footballer, Sebastian Petrovic, serving as the only internationally qualified blind football referee in Australia and regularly helping mentor the clubs’ blind footballers.

“We are able to utilise the club facilities and the experience of our coaching team to provide our blind footballers with a fantastic development opportunity. They train side-by-side with vision impaired players on Sunday mornings preparing for the national training camps,” Skip Fulton, Football Coordinator of the All Abilities Program, said.

“Our program is designed for everyone however, and we welcome those who are looking for some exercise or something new to try. Together with Football Victoria and Blind Sports Victoria we offer free introductory sessions bringing new participants to the game.”

Featuring three members of the Australian national team, the South Melbourne squad played an exhibition match against Olympic FC from Brisbane as part of the announcement in front of the media on Sunday.

“I am incredibly proud of the program we have put together and the opportunities it provides to so many members of our footballing community,” Club President, Nicholas Maikousis, said.

“We are building on sixty years of football heritage and it is exciting to see South Melbourne competing on the national stage in this form of the world game.”

The National Para 5s Series will commence in June with South Melbourne FC taking on Olympic FC in the first fixture.