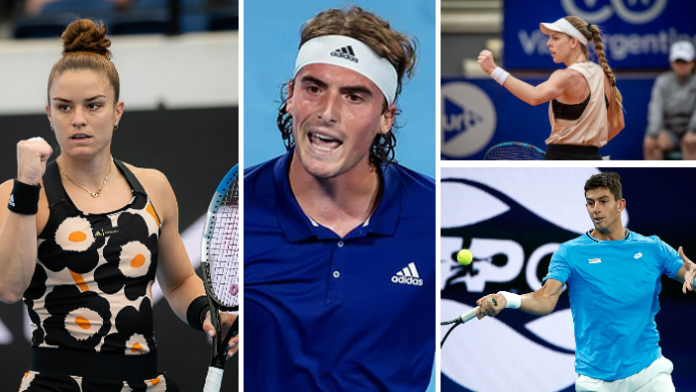 Tennis fever has hit Adelaide and Sydney this week with both the Adelaide International and ATP Cup tournaments going ahead.

A number of Greek tennis stars have been playing in these tournaments and so far there’s been mixed success with plenty of wins but also a number of losses.

Relative newbie, Despina Papamichail, has kicked off her tennis season with a bang at the Adelaide International tournament.

This win secured Papamichail’s place in the main board of the tournament. In the first round, she will face Czech tennis player, Marie Bouzkova.

For Maria Sakkari, she also battled past Slovenia’s Tamara Zidansek in three sets to reach the second round of the Adelaide International on Monday.

READ MORE: “I am here to win this tournament”: Maria Sakkari.

Sakkari admitted she had been well below her best as she warms-up for the Australian Open later this month.

“It wasn’t a good match from my side but I found a way through it, I did everything I had to do to win – which sometimes is enough – and I’m excited to be in the second round,” she said after the match.

Argentine ace, Diego Schwartzman, has upset world No.4, Stefanos Tsitsipas, to claim the tie against Greece and keep his nation top of Group D in Sydney.

Tsitsipas, who had surgery in November and missed Saturday’s meeting with Poland’s Hubert Hurkacz before playing the doubles rubber, took advantage of Schwartzman’s misfiring serve to gain the early advantage at the Ken Rosewell Arena.

He grabbed an early break in the second set but lost his way thereafter, as Schwartzman clawed his way back and levelled the contest before fending off a late comeback attempt to help Argentina stay unbeaten in Group D.

After the match, Tsitsipas revealed he was unsure whether the elbow injury would allow him to continue playing in the ATP Cup.

While Tsitsipas said he thought he would have enough time to recover and play at the Australian Open in two weeks, he conceded he was in uncharted waters.

“That is enough (time to recover), I believe. But I haven‘t had (this kind of injury) before, so I don’t know. It’s my first time experiencing something like this,” he said.

Michail Pervolarakis fought against Federico Delbonis (No. 44) in the ATP Cup on Monday, but was ultimately defeated in both sets.

This was Team Greece’s second defeat in the tournament, meaning they are now out of the semi-finals.

Maximo Gonzalez and Andres Molteni completed a terrific day for Argentina at the ATP Cup with a tiebreak doubles victory over Greece in Sydney.

Gonzalez and Molteni triumphed 6-3, 4-6 (11-9) over Markos Kalovelonis and Petros Tsitsipas to complete a 3-0 clean sweep and stay top of Group D ahead of Poland.