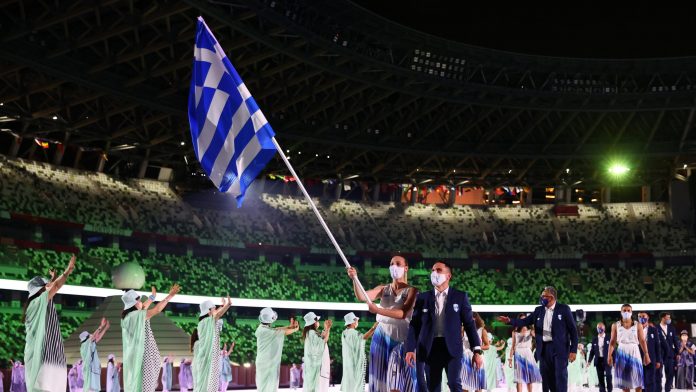 Flag bearers Eleftherios Petrounias and Anna Korakaki proudly walked out the Greek flag and the rest of the Greece’s athletes as the 2020 Tokyo Olympics got underway with the opening ceremony.

Bach began his remarks by telling those in the stadium, “Today is a moment of hope. Yes, it is very different from what all of us had imagined. But let us cherish this moment. Finally, we are all here together.”

Per Olympic tradition, Greece were the country first to walk out as a reduced crowd erupted in cheers. Petrounias came out in a traditional black suit, while Korakaki and the other female athletes wore an elegant blue and white dress.

Greece’s position of honor in the Parade of Nations is a tribute to its history as the birthplace of the ancient Olympics, as well as the host of the first modern Olympics in 1896.

The order of the countries was organised by the Japanese alphabet, meaning Australia was the 38th country to walk out. Australia was led by flag bearers Cate Campbell and Patty Mills.

Tennis star Naomi Osaka has lit the cauldron at the opening ceremony, ending the flame’s long journey from Greece to these delayed Olympics.

The cauldron sat atop a peak inspired by Mount Fuji. It’s a sphere that opened like a flower, “to embody vitality and hope,” organizers said. A second cauldron has been placed in Tokyo’s waterfront area was to be lit after the opening ceremony.