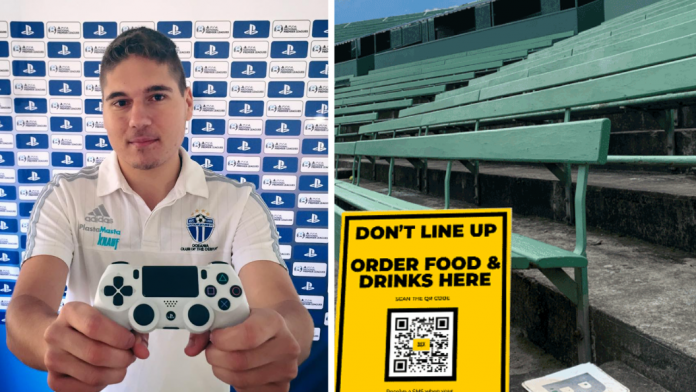 One of the most frustrating things about watching a live sporting event – or any live event for that matter – has to be that moment when you get cravings so bad that you decide to head for the kiosk or the nearest canteen, only to realize that while you’ve been waiting in line to get your favorite snack, you’ve just missed an important moment.

That’s exactly the problem that former South Melbourne e-sports representative Peter Saisanas is aiming to solve. With the development of a new app, titled “Get Duck”, he hopes to put an end to long queues and that way spectators will no longer miss out on their favorite events.

“The process is, you rock up to a sporting ground, there’ll be signage around the venue, whether it’s posters or a-frames, yard signs, anything will suffice. Fan scans a QR code, a menu pops up which they can scroll through, choose whatever they want, place their order and pay on-the-spot. Then they get notified via SMS when the order is ready to be picked up, so they can just go from where they are, get the food and then return to their seat without missing any of the action,” he explains to The Greek Herald.

When asked about the name of the app, the young creator tells us that it has nothing to do with the adorable animal: “It’s going to be called ‘duck’, as in to duck the queue or to duck the line or to duck the bill even if you’re going to pay on your phone so it’s to that ilk. I’m not sure of the correct phrasing but it’s under that terminology. So that’s where the name comes from specifically and I really like it personally because it’s a short, snappy word that a lot of people can remember.

“We’ve been through all the beta testing; the process has been surprisingly long. I’m doing this with a good friend of mine, Rowan McNamee, son of former Wimbledon champion Paul McNamee. He plays for South Melbourne and we’ve been best mates for ages.”

“The idea came about when at South Melbourne Hellas games, I’m not sure if you’ve been but the canteen is actually away from the field so you can’t watch the games. So many times, I’d be in there and I’d hear a roar and be like ‘Oh, bloody hell!’, you know? This problem of missing action to get food has been ongoing. Especially the food at all these Greek clubs, with the souvlakia and all that. I mean you want to go there and watch the game, but you also want to enjoy the food.”

Moving on from the upcoming app, the former E-League star tells us about his decision to put an end to his career and how it all began:

“My gaming journey was seven years deep at the start of this year. What got me into gaming, when I was five or six-years-old, was when my mother had been diagnosed with terminal cancer. Back then, I didn’t really know what that meant. I remember going to the hospital and just sitting in the waiting room where they had a console. I would play the Super Nintendo and ‘Earthworm Jim’ and that would be the greatest distraction in the world. Anyway, fast-forward all these years later, my mum luckily survived and she’s still with us today, which is amazing but since then, gaming has been my release.

“Coming to the end of last year, I was able to raise about $2,500 for Kids with Cancer in Australia and I felt like I had completed a purpose that I had set out to do. So, I started my gaming journey in a hospital due to someone I knew being sick with cancer and being able to end my career raising money for young families and giving them $2,500, for me, I just felt as if I had completed something and it had come full circle. I felt like I finished on a happy note.”

When asked about the greatest moments of his career, the former Australian FIFA representative points out his run in the 2013 Doha World Cup qualifiers and getting to play for his childhood club, South Melbourne. He also pointed out that getting the chance to work with Peter Filopoulos and Harley Mitaros at Perth was a great opportunity for him.