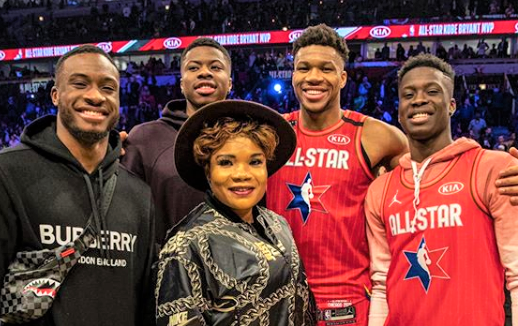 Milwaukee Bucks star Giannis Antetokounmpo and his brothers donated 10,000 surgical masks to the Athens suburb of Zografou on Wednesday to help fight the coronavirus pandemic.

The Antetokounmpo family also asked for some of the masks to be distributed to the district of Sepolia, where the brothers grew up.

“I’d like to thank the Antetokounmpo brothers for their generous donation that becomes even greater since it takes place in difficult times for the whole planet,” Mayor of Zografou, Vassilis Thodas, said.

Giannis and his brothers Thanasis, Kostas and Alexis grew up in poverty in their early days in Greece, where their parents had arrived from Nigeria as immigrants.

They grew up selling merchandise in the streets of the capital in order to help their poor family, but playing basketball for the Filathlitikos team in Zografou changed their lives.

“With their donation they confirm that they have not forgotten the city which played a role in their basketball careers. And when the nightmare of the coronavirus is over, the municipality will honour Giannis and his brothers accordingly,” the Mayor of Zografou added.

The municipality announced that the masks will be immediately distributed to employees in the region and to vulnerable groups.