On This Day in 1911, Greece’s flagship armoured cruiser Georgios Averof was delivered to Greece 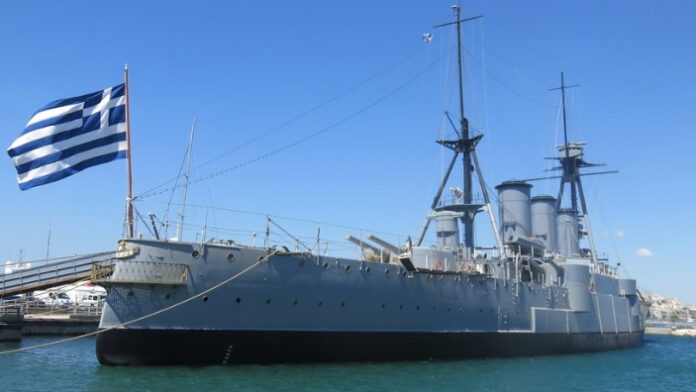 On this day in May 1911, the historic Italian-built Georgios Averoff cruiser arrives in Greece six years ahead of WWI.

The Greek Herald traces Georgios Averof’s glory days in the most defining and important events in Greece’s history.

The Georgios Averof cruiser was built as part of a series of three armoured cruisers, called the ‘Pisa’ cruisers, built by Italy on March 12, 1910.

Several countries were vying for the cruiser during a trialing time for their Armies before it’s benefactor, George Averoff, claimed the ship in 1909 at a price of £300,000. This is the equivalent of £23.4m today (adjusted for inflation), or just under AUD$42m.

Averoff (1815-1899) was a well-known Greek philanthropist and slave trader when he bought the most modern warship in the Aegean at the time.

Captain Pavlos Kountouriotis succeeded Captain I. Diamnos as captain of the ship at the beginning of the First Balkan War.

It sailed to the Dardanelles Strait on the European-Asian boundary in northwestern Turkey before occupying Mount Athos and the north and east Aegean islands. This escalated tensions with Turkey and led to Greece’s victory in the Naval Battle of Elli (3 December 1912) and Lemnos (5 January 1913) for control of the Aegean.

The Georgios Averof went on to block fleets, occupy islands and protect maritime transport, including of weapons and armour, between Greece and their Allies.

The Georgios Averof also played a role in Greece’s WWI battles in Constantinople and Hagia Sophia and WWII until it was decommissioned in 1952. The cruiser has served as a monument museum since 1985 in Faliro, Greece.

The Georgios Averoff has been preserved as an educational initiative and tribute to the Hellenic Army.

It is visited today by schools, institutions, organisations, and other members of the public.