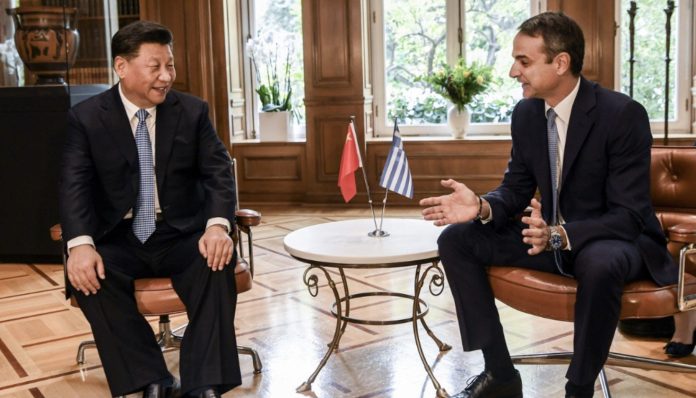 Greece has agreed to open up to further investment from China in what President Xi Jinping described as a “model of Sino-European cooperation”.

The two sides signed 16 deals in total on Monday, with Athens offering investors access to its energy, infrastructure and cultural sectors in return for more agricultural exports.

The Chinese leader’s visit comes at a time when his country’s economic activities are facing increased scrutiny across the European Union, but the two leaders struck a positive note on Monday with Xi promising to look at “deeper cooperation with Greece in all sectors”.

Greek Prime Minister Kyriakos Mitsotakis also pledged to “overcome any obstacles” facing a Chinese state-owned company’s plan to upgrade the Port of Piraeus and agreed to an extradition treaty between the two sides – a move seen as helpful to Xi’s anti-corruption drive.

China has been putting pressure on Greece to fully accept the plan by state-owned shipping giant Cosco to expand the Port of Piraeus, which is on track to become the busiest container port in the Mediterranean.

But the project ran into trouble earlier this year after building work was banned in much of the port due to concerns about the archaeological impact.

Mitsotakis’s government, which came to power earlier this year, has since approved two-thirds of Cosco’s proposals.

On Monday Xi stressed that “investing in the Port of Piraeus is the biggest project of the Belt and Road Initiative” – his intercontinental infrastructure plan – as the two sides signed a memorandum of understanding on the “successful implementation” of Cosco’s plans.

An analysis by Greek national broadcaster ERT said this meant that both sides had “stated – officially – that [they] intend to overcome any obstacles to the implementation of the Cosco investment programme”.

However a Greek diplomatic source said the government had been careful not to commit to the “full implementation” of the plan because it still needed to take archaeological considerations into account.

Dionysios Stivas, a specialist on EU-China relations at Baptist University in Hong Kong, said that while the deals were a win for both sides, they were more favourable to China.

“The agreements strongly reflect the differences in economic might between the two countries,” he said.

“There are many agreements beneficial for the Chinese enterprises active in the maritime, logistics, telecommunications and banking sectors, which Greece will surely benefit from – but the profits for China will be much larger than for Greece.”

The two sides also agreed on the extradition treaty despite growing international scepticism about dealing with the Chinese judicial system.

A since-withdrawn plan by the Hong Kong authorities to introduce a bill to help send suspects to mainland China triggered months of anti-government protests that are still continuing.

Stivas said he hoped the “sharp differences between the legal systems of Greece and China have been considered carefully” in the drawing up of the extradition treaty.

In return, Greece secured a deal to secure greater access to the Chinese market for its agricultural products, including kiwi fruit, and an air transport agreement that could boost the number of visits by Chinese tourists.

Other deals included China agreeing to bid to invest in a project to connect power supplies between the island of Crete and the Greek mainland, while it also said it would open a new Confucius Institute at a Greek university.

The two sides also made what appeared to a veiled attack on the United States, with Xi stating that he did not think international relations should purely be about self-interest and insisting that China would not become a hegemon.

Meanwhile Chinese state broadcaster CCTV reported that Mitsotakis had said Greece opposed the theory of a “clash of civilisations” – a concept some US officials have invoked in their dealings with Beijing – and stressed that confrontation would not help to resolve problems.

Xi’s visit to Greece underlined the differences in how EU countries intend to shape their relationship with China.

Last week Mitsotakis visited Shanghai and met the Chinese leader – a trip that coincided with that of French President Emmanuel Macron.

But while the Greek leader placed more emphasis on bilateral ties between Athens and Beijing, Macron highlighted the importance of European unity and took an EU commissioner and German minister with him on the trip.

Macron also raised sensitive issues such as Hong Kong and Xinjiang – where up to a million ethnic Uygurs and other Muslims have reportedly been detained in re-education camps – but the Greek leader’s comments focused almost entirely on trade and the economy.