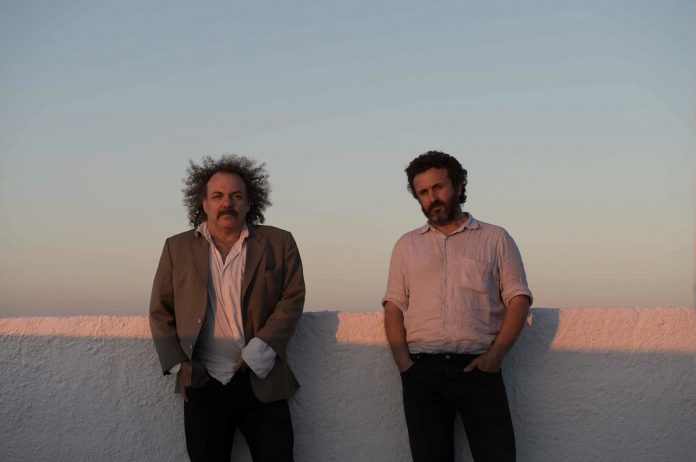 Xylouris is the son of popular Greek composer, Psarantonis. He was born and raised in Crete and lived in Australia for 8 years, in the 90s.

While touring with his father, he took a particular liking to Melbourne’s “lively music scene” and was inspired to get involved in Australia’s band and music scene.

It was during this era that Xylouris became good friends with Australian drummer, Jim White. White is known and loved throughout the world as the drummer for bands ‘Dirty Three’ and ‘Venom P Stinger’.

Four years ago, the two decided to cultivate their friendship and separate dynamics, to form the band Xylouris White.

While Xylouris is known and loved in the Cretan music scene, and White is heavily involved in Australian bands, the two decided to mix their individual sounds – outside the bounds of national or cultural musical templates.

“What influences me and Jim is what we bring separately to our sound. It’s not a question of a national music. Where I come from is in my soul and it comes out naturally,” said Xylouris.

The two come from wildly different musical backgrounds, but influence each other from an individual perspective to create their own sound.

“I am not an Greek ambassador for music, I am a musician. The Australian music scene is wide and varied and appeals to many. I consider music to be a great breaker of boundaries,” said Xylouris.

“Jim spent a long time listening to Psarandonis. Naturally we influence each other and it doesn’t have to do with ones ancestry but with ones musical self.”

“There is no vision or intention in the future to influence or adapt to the Australian music scene, or Greek, or any other music scene. We do what we do, and music speaks to everyone. It’s what we do that teaches us what we are looking for.”

Xylouris White are an unlikely pair, but have used the authenticity of their friendship to integrate into the Australian music scene, which knows no bounds when it comes to assimilation or following the pack.

“Our new record ‘The Sisypheans’ represents the influences that we have on one another, from the late 80s until today in a natural way. We’re not looking for anything more, just the authenticity of our music and friendship. That’s what makes us proud of it,” said Xylouris.