‘There is no Kytherian house without relatives in Australia’: Mayor Efstratios Charchalakis 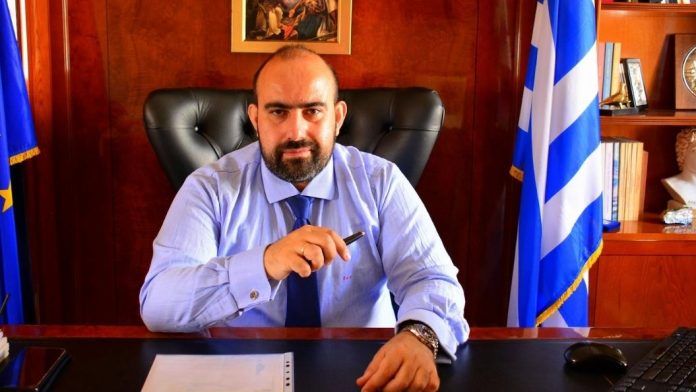 Mythical Kythera: the benchmark for Australian Hellenism. The visitor’s eye is lost in the haze of the sun’s reflections on the sea where according to the myth of Hesiod the goddess Aphrodite emerged.

Nearly 80,000 Australian Greeks have come from the island of 4,000 inhabitants, who pride themselves on their ancestry. Unknown and well-known Κytherians, such as the Oscar-winning director, George Miller, Peter Maneas of the famous show “My Greek Odyssey”, the well-known businessmen, Nick Politis, Peter Magiros, Minas Souris and Professor, Maria Zarimis, among many others.

The Mayor of Kythera, Efstratios Charchalakis, is not wrong when he tells the Greek Herald that: “the [Greek] diaspora in Australia is the alter ego of Kythera and Kytherians. There is no Kytherian house that has no relatives in Australia.”

Although the Mayor of Kythera is only 40 years old, he is distinguished for his dynamism and his vision for the island. He is a “doer,” as we say in Australia. He does not say much, but he does a lot, having 22 years of experience in local government.

The “First Week of Australia” was organised during his mayoralty with the second to follow in 2022.

In his thoughts the vision of the emblematic Museum of migration was born, which when built, will be a reference point for expatriate Hellenism, while in May he intends to travel to Australia to celebrate the 100 years since the founding of the Kytherian Association of Australia.

With many topics to discuss, we asked the first citizen of Kythera, what the Australian diaspora means for the island.

“First of all, I want to thank you very much for giving me the opportunity to communicate – through your historical newspaper – with the tens of thousands of expatriate Kytherians who are in Australia.

“When 4 years ago, the Ambassador of Australia to Greece Mr. Griffin visited our island, he was surprised to find that in every square, in every village, at every social event he constantly listened to conversations in English. “I think I’m in Sydney”! he told me.

This is exactly what Australia is like for our island: the alter ego of Kythera and Kytherians. There is no Kytherian house that has no relatives in Australia. 4,000 residents of Kythera, 80,000 Kythera Greeks of Australia! For us in Greece, this huge community means a lot.

“They are our compatriots who have successfully integrated into the Australian society, in the fields of economics, business, politics and culture and of course never forget their place of birth. They contribute in every way to the development of Kythera, strengthen the local economy, become sponsors of important projects and activities over time”.

Recently, as the “Greek Herald” reported, the first step was taken to build the “Kytherian Migration Museum” in Agia Pelagia. We asked Efstratios Charchalakis where the project is standing at right now.

“The Kytherian Migration Museum started as an idea about 3 years ago. It was something I always had in mind and in 2019 I shared this thought and idea with the Association “Friends of Museums of Kythira ” (FMC), created mainly by Kytherians of the diaspora which contributed the most – throughout the years – to the financing of all studies for the reconstruction of the Archaeological Museum of Kythera that had suffered huge damage from the earthquake of 2006.

“Indeed, the FMC immediately embraced this emblematic idea and we proceeded in 2020 to sign a memorandum of cooperation. The total cost of the studies will exceed 60.000€ and will be covered entirely through the FMC and by contributions from expatriates (and not only). We estimate that the studies will be completed along with the licensing of the project in about 1 year from today.

“The original plans have already been completed and are impressive. The museum will include state-of-the-art infrastructure, such as a conference hall, an outdoor event space, a roof garden, a shop, etc.

“It is a visionary infrastructure, not only for Kythera, but nationwide. Besides, there are very few immigration museums internationally and they are all located in state capitals and major cities (Ellis Island in N. York, London, Adelaide, Brussels, Amsterdam, Melbourne).

“The museum will present the phenomenon of migration in all its manifestations: how antikytherian immigrants were found in Chile in the 1870s, how the Kytherians “conquered” Izmir and Alexandria in the 19th century, then how they were found in Australia and the USA. It will definitely be something unique”, says the Mayor of Kythera, who as previously mentioned, plans the organization of the “Second week of Australia”.

“The “Second week of Australia in Kythera” aims to continue the corresponding action that we implemented for the first time in 2017, with the presence of the then Ambassador of Australia to Greece, Mr. John Griffin. The design is still in a very early stage because unfortunately the data are changing every day due to the pandemic”.

The meeting with the Australian Ambassador and the trip to Sydney

Recently, Mr. Charhalakis met the Australian Ambassador to Greece, the expatriate Arthur Spyrou, and confirmed the island’s ties to the country.

“Indeed I had the pleasure of meeting the Ambassador of Australia to Greece, Mr. Spyrou, who is of Greek origin.

“I had the opportunity to discuss with him about the Kytherian diaspora of Australia and the support of the embassy both in the creation of the Museum of Kythera Migration and in the organization of the “Second Australian week in Kythera”.

“Mr. Ambassador was delighted with the proposal for the creation of the Immigration Museum and we agreed to have close cooperation, while he will certainly visit our island.”

In 2022, the 100 years of the “Kytherian Association of Australia” will be celebrated, which was founded in 1922 in Sydney and continues its century-old contribution to the community and the island.

“With the president and members of the Kytherian Association of Australia (as with all expatriate Kytherian associations abroad) we have a lasting and excellent cooperation both as a municipality and as a local community more widely, for many years.

“Through the Association, important social and cultural activities have been funded on our island, such as the creation of the Municipal Library, the organization of cultural events, etc.

“With the president, Mr. Emmanuel Alfieris, as with the previous president, Mr. Victor Kepreotis, we have continuous communication and cooperation on a number of issues, such as the proposal for the construction of the statue of the expatriate Kytherios, in Agia Pelagia, at the expense of the Association, as part of 2022’s celebrations of 100 years since its establishment.

“I hope to visit Sydney next May, to participate in the anniversary events, which I am sure will be an occasion for the further strengthening of the relations of our expatriates with the homeland and at the same time will become a springboard for the new generation of Kytherians to learn and continue the history of their ancestors who many decades ago left their island for a very distant country, in search of a better life”.

Efstratios Charhalakis was first elected Mayor of Kythera in 2014 and although in Greece, even in the local government everything changes, the 40-year-old politician remains firmly in his position. It is a practical proof of his work, appreciated by his fellow citizens. We asked him to make a small reference to the challenges he faces, especially for expats who due to the pandemic did not manage to visit him in 2020 and 2021.

“Indeed, the absence of our expatriates during the summer of 2020 and 2021, was more than evident and had a serious economic impact on the local economy, as expatriates are also factors of strengthening local GDP, at a seasonal level. Perhaps the best reward of our work is that every summer thousands of Australian and US Kytherians visit our island, and they see significant positive changes. They see new completed projects of road construction, reconstruction, lighting, water supply and more.

“It is no coincidence, in fact, that the Municipal Authority has 2 (out of 9) municipal councillors who come from the Australian community and have lived many years in Australia”.

Concluding, this interesting interview, we asked the Mayor of Kythira to send through the “Greek Herald” a message to the Parikia.

“Firstly, I would like to wish the “Greek Herald” to continue its work for another 95 years and for much more. The Greek diaspora, wherever it is, is an honor for Greece. They are the ambassadors of Greek civilization to the lengths and widths of the Earth.