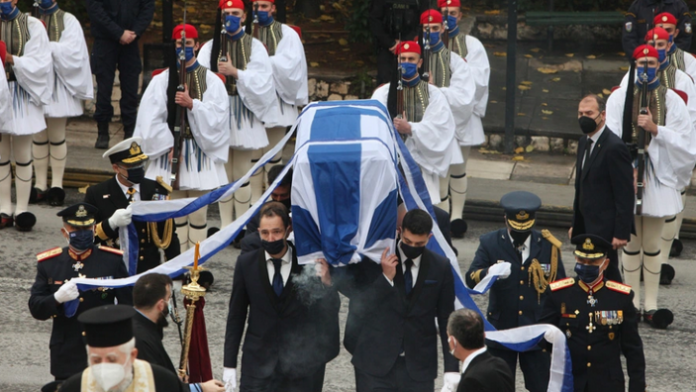 The funeral service of the former president, Karolos Papoulias, took place with full state honours on Wednesday at the Church of Agios Spyridonas in Pangrati, Athens.

Papoulias died on Sunday, December 26 at the age of 92.

Sakellaropoulou delivered a small eulogy and praised Papoulias for his work ethos and patriotism.

“Today we say goodbye to a faithful and unyielding servant of our country. The nobleman from Epirus, who was never tempted by the trappings of power,” she said.

“His commitment to national interests had been stable and experiential. He marched through politics with the distanced devotion that gave him the great advantage of clearly distinguishing the big picture in diplomacy and the path of the country.”

Papoulias served in the largely ceremonial office for two terms, from 2005 to 2015. One of the founding members of the socialist PASOK party, he was its foreign minister in 1985-89 and 1993-96, and served as MP for his native Ioannina for 26 years.

Papoulias will be interred in the city of Ioannina on Thursday.