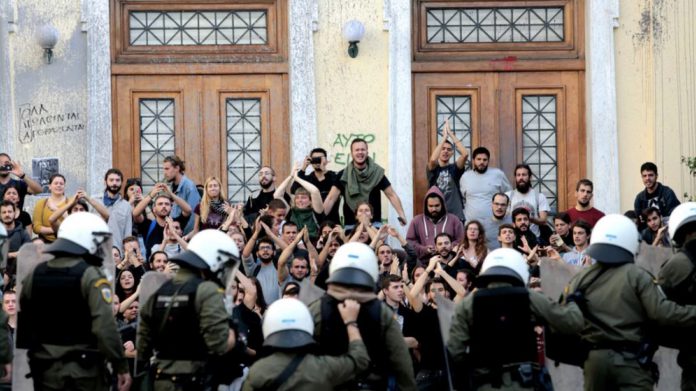 Ongoing student protests at Athens University of Economics and Business are increasing tensions and violent responses from police.

The protests began with the Greek governments proposal to remove the “asylum law” which bans police from entering university grounds. This law was created as a response to the 1973 ‘Athens Polytechnic Uprising’, which saw the murder of over 24 protesting students by police and military on November 17th.

On Monday, authorities at the Athens University of Economics and Business decided to shut down the university until November 17th, due to the ongoing protests, police interventions, raids and violence occurring at the university.

With about 200 students rallying outside the University of Economics and Business, on Monday, several dozen broke through the locked gate and entered the front yard, witnesses said.

Police fired gas and firecrackers to disperse them, as some students threw stones and scuffled with officers while others clapped and chanted slogans.

Leftist parties say the concept of academic sanctuary, which prohibited security forces from entering universities, protected students’ freedom of expression. But the government, which came to power in July, said it had been a cover for lawlessness.

Prime Minister Mitsotakis defended the law amendment by saying, “When it comes to security, similar operations take place all over the territory. Greeks will feel safe again. This policy has no sign, no left, no right, no centre. It is the obligation of the state for the safety of the citizens.”

He continued to suggest that universities needs to end political protesting, “mallets and molotov-cocktails”, and become a safe place of learning:

With the university set to reopen on the anniversary of the Athens Polytechnic Uprising, which has historically become a day of anti-government protests, it is likely the tensions between students and police will not simmer down in the coming days.

Share
Facebook
Email
Twitter
Pinterest
Linkedin
WhatsApp
Viber
Print
Previous articleGreece makes top 10 for best country to retire in Europe
Next articleThe Plundered Past of the Parthenon Sculptures: How the Greeks can get back their marbles