One small step for La Trobe, one giant leap for Australia’s Greek community 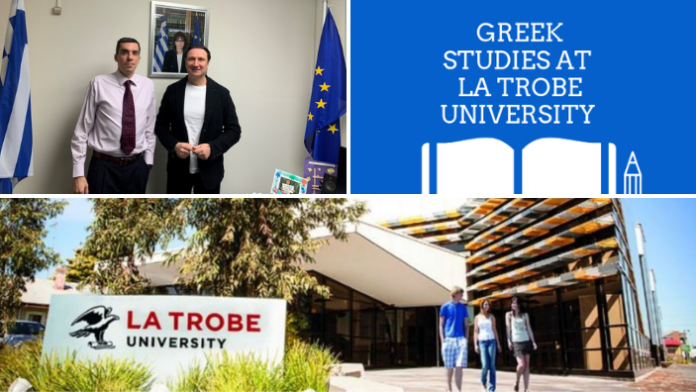 No final decision has been made yet with regards to the discontinuation of the Greek studies program at La Trobe but there seems to be a beam of light at the end of the tunnel according to Greek Community of Melbourne President, Bill Papastergiadis.

In a meeting that took place on Tuesday, between the University’s Vice Chancellor John Dewar, academics and a delegation from the Greek Community including the outgoing Greek Consul General in Melbourne Dimitrios Michalopoulos and Victorian Labor MP Kat Theofanous an additional extension of 14 days was given until a final decision is made.

“We agreed to put a submission to the university which will document a mechanism for providing some financial support and also outlines initiatives that we can develop to increase student numbers. Clearly, the more students they have, the less the financial cost for the university,” Bill Papastergiadis told The Greek Herald.

“We are going to work together to try and find a solution. We have a meeting scheduled for next Tuesday with the Vice Chancellor with no guarantees but the University will hopefully approve this submission and this will help retain the program,” Papastergiadis said.

“This is a great development. It’s extremely rare for a university to go back on a decision like this and as a community we’ve done a great job so far. We now need to match the campaign with financial support.”

In his speech, during the meeting, the outgoing Greek Consul General in Melbourne, Dimitris Michalopoulos expressed his support and promised that he and his successor will keep contributing to the efforts for the continuation of the program.

“You have received a letter signed by the Secretary General of the Ministry of Foreign Affairs, responsible for Greeks Abroad and Public Diplomacy, Mr. I. Chrysoulakis.  In this letter, which summarises the Ministry’s position, the request to save the Programme is based on solid arguments relating to past Greek support but also on current pledges, such as the secondment of an assistant to the Programme from the ranks of the Greek-language teachers seconded every year in Australia.

“I would like to assure you that the Consulate General, as well as the Office of Education Coordinator will be working towards the goal of maintaining at all costs the seconded teacher at the Programme for years to come,” reads the statement given to the media by the Consul General.

In a statement to The Greek Herald on November 23rd La Trobe University wrote that they “will carefully consider the outcomes of staff consultation, as well as representations made from members of the community, regarding the future of the program before making any decision. “