Mitsotakis and Erdogan agree to improve ties during meeting in Istanbul 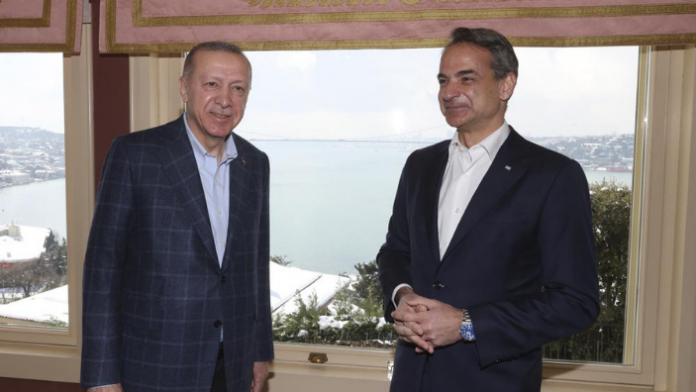 The leaders of Greece and Turkey held talks over lunch in Istanbul on Sunday in a rare meeting between the neighbouring countries, which have been at odds over maritime and energy issues, the status of Aegean islands and migration.

During the talks, Greek Prime Minister Kyriakos Mitsotakis and Turkish President Tayyip Erdogan agreed to improve ties, according to a statement by the Turkish presidency.

“Despite the disagreements between Turkey and Greece, it was agreed at the meeting to keep communication channels open and to improve bilateral relations,” the Turkish statement said.

“Pointing out that Turkey and Greece have a special responsibility in the changing European security architecture with Russia’s attack on Ukraine, the meeting focused on the mutual and regional benefits of increasing cooperation between the two countries.”

Greece and Turkey are nominal NATO allies but have strained relations over competing maritime boundary claims that affect energy exploration rights in the eastern Mediterranean.

Greece has also accused Turkey of allowing migrants to cross its land and sea borders despite a deal with the European Union to prevent illegal crossings.

Erdogan told Mitsotakis during the meeting that “with the goal of starting a new page in bilateral relations,” Greece and Turkey can make headway on issues like the Aegean, minorities, combating terrorism and migration.

READ MORE: Erdogan thanks Mitsotakis for well wishes after testing positive for COVID.

Later in the day, Mitsotakis expressed his belief that his meeting with Erdogan went well to Ecumenical Patriarch Bartholomew when the two met at the Greek Consulate in Istanbul on Sunday.

“I must tell you, it was a meeting that took place in a good atmosphere. I hope we agreed we face so many challenges as humanity and as two NATO allies at this time that it is more important to focus on what unites us and less than on what divides us,” Mitsotakis told the Patriarch when they met.

The Greek Prime Minister said he believes “we set the foundations to improve our relations,” and added that if there was good progress, Greece might organise a High-Level Cooperation Council meeting in autumn. This was a mechanism the two countries set up in 2010 for their rapprochement.

In response, Patriarch Bartholomew said “every step to build mutual trust between the two governments and the two peoples fills us with joy.”

This meeting between Mitsotakis and the Patriarch came after the Greek Prime Minister also attended a service for Orthodox Christians at the Ecumenical Patriarchate of Constantinople earlier in the day.