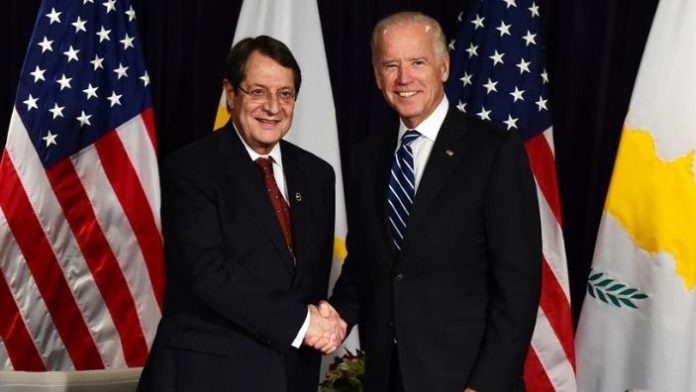 The assurance that the US continues to consider the Republic of Cyprus as an important partner for regional stability and security in the Eastern Mediterranean and the commitment to work to further deepen the strong US-Cyprus ties, was given by US President Joe Biden, in a response letter sent to the President of the Republic of Cyprus Nicos Anastasiades.

According to a government spokesman, in his letter, Biden thanks Anastasiades for his leadership, friendship as well as the important role that the Republic of Cyprus plays in addressing global challenges and states that he looks forward to working with the President of the Republic to address issues of common interest in the Eastern Mediterranean.

According to the same source, the President of the United States goes on to express his appreciation for the briefing received by the President of the Republic of Cyprus in his letter of 14 May at the informal conference in Geneva and expressed the clear position for the reunification of Cyprus on the basis of the bi-zonal bi-communal in accordance with UN Security Council resolutions.

The US President also refers to the issue of Famagusta, stating in particular that the US is concerned about the unilateral decision of the Turkish Cypriots, with the support of Turkey, to open part of Varos in October 2020.

President Biden states that the United States has called and will continue to call for the reversal of this decision of the Turkish side and will discourage, as he characteristically emphasizes, further provocative actions.

The US President also states that his government will continue to encourage constructive Turkish participation in the next round of UN-sponsored talks.

“In conclusion, President Biden expresses his desire to soon continue his discussions with the President of the Republic of Cyprus, Nicos Anastasiades, on issues of common interest,” said the spokesperson.