On this day in 1922, Greek singer Grigoris Bithikotsis was born 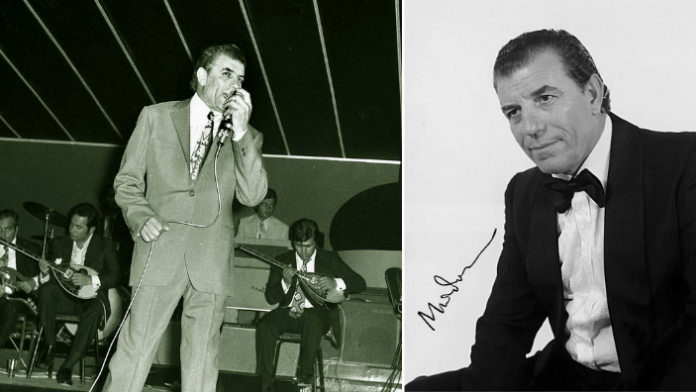 The death of Grigoris Bithikotsis marked the end of an age of great urban folk music.

Grigoris has often been described as the voice of Greece, his songs brought traditional music to a contemporary audience, and within his lifetime, he composed over 200 songs.

His music is loved all around Greece, and some of his biggest fans are among famous people Alain Delon and Aristotle Onassis.

Grigoris Bithikotsis was born in 1922 to a poor family in the district of Athens called Peristeri and was the youngest of 8 siblings. When he was a teenager, he developed a love of music, and despite working as a plumber, he would also sing at the local tavern near his home.

He found his true passion for music when he heard three Greek musicians singing and playing the bouzouki for the first time.

The three musicians were famous Greek folk musician: Manolis Chiotis, Markos Vamvakaris and Stratos Pagioumtzis, who were famous for playing in the ‘rebetiko’ style. This style that was a blend of music styles throughout Greece would be the inspiration for Grigoris song writing. After hearing the musicians, Grigoris bought a bouzouki and studied music in secret.

In 1947 Grigoris was sent into exile due to his political views he was sent to Makronissos, and island used as a political prison camp. On this island he met Mikis Theodorakis, the famous composor most known for his score in the film Zorba the Greek, together the pair began writing music.

His collaboration with Mikis Theodorakis marked his career to the top. One of the most famous songs to come from the duo was “Epitafios” it was written by Theodorakis but it was the voice of Grigoris that completed the piece making it a masterpiece.

After years of practice and studying, Grigoris made his debut in 1949 and performed for the first time on stage.

Grigoris Bithikotsis is also known to have sung poems written by the famous Nobel award-winning poet Odysseas Elytis “Aksion Esti” and had also performed songs by other famous composers such as Markos Vamvakaris, Vassilis Tsitsani and George Mitsakis.

During his fame, he was married twice, and he had three children. His son, also named Grigoris, took the same path, and he became a singer. When Grigoris was asked why he give the same name to his son, he answered in his poetic nature that when he will die, he will like that after his funeral, a Grigoris Bithikotsis to return back home.

At the later stages of his career, Grigoris received the Order of the Phoenix by president Kostis Stephanopoulos for his contribution to folk music. The Greek government usually gives this order to citizens who have excelled in arts.

In 2005, Grigoris Bithikotsis died in Athens after three months of being hospitalized. He was 82 years old when he passed away.

His funeral was attended by thousands of fans but also by many famous politicians. They paid their respects to the ‘voice of Greece’ with a carriage pulled by two horses, one white and the other one black, a symbolic reference to his song called “a beautiful carriage with two horses”.

He was a great artist who expressed the happiness and the sorrow of the Greek nation throughout his music. He was authentic in his style and poetic with his performance, this is why Greeks loved Grigoris Bithikotsis and called him the voice of Greece.