‘I want to be number one’: Andriana Petrakis earns title in inclusive SA Tennis Championships 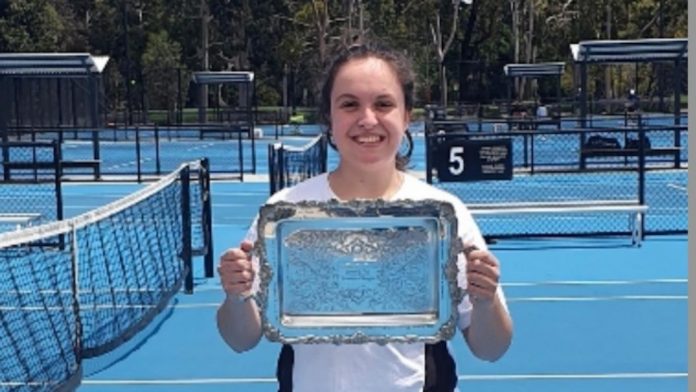 It was an all-South Australian affair last weekend at the 2021 Peter Smith PWII Open Championships Women’s Singles event with Adelaide’s Andriana Petrakis taking out the title from Joanna Klaosen.

‘I want to become an Australian champion,’ Andriana,19, told The Greek Herald.

An athlete on the autism spectrum Andriana Petrakis has been playing tennis for ten years competing in state tournaments and climbing the ranks to become part of the Australian national team.

“I love hitting the ball and learning techniques. Forehand It’s my favourite shot,” she said.

But apart from a killer forehand Andriana has a bright wide smile and an attitude towards life that many would envy.

Last year she won the Most Outstanding Athlete with a Disability award and now she wants to use her achievements to inspire other people with disabilities.

“Tennis has helped me improve my skills, strengths, weaknesses it has made me a better person and an athlete. It also helped my autism,” she said.

“To everyone who has special abilities I say keep strong, stay positive, be happy, learn every day and work hard to succeed.”

Andriana’s father and her biggest fan, Peter Petrakis, shared his pride and said that his daughter started playing tennis as an alternative to occupational therapy.

“We couldn’t afford it and we thought tennis would be a cheaper alternative to help her improve her hand-eye coordination and social skills. We didn’t expect her to get to this point,” Peter said and shared his message with parents of neurodiverse children.

“Andriana was diagnosed with autism when she was nearly two years old and my wife and I were not sure how to help her. She spoke her first word when she was five and we were excited but the doctors had prepared us that Andriana might not talk or make progress. But she did.

“Don’t give up on your children. If they have a disability, keep going and do your best to help them.”

Apart from one of SA’s finest athletes Andriana Petrakis helps others in the community through her career as a tennis/pickleball coach with South Australia’s first disability sports organisation registered with the NDIS.

“I want to continue and develop myself as a leader and use my public speaking skills to motivate. I also want to become number one tennis player in Australia and maybe the world’s two.”

We have no doubt she will get there.

Keep smiling and good luck Andriana! You’ve got this.