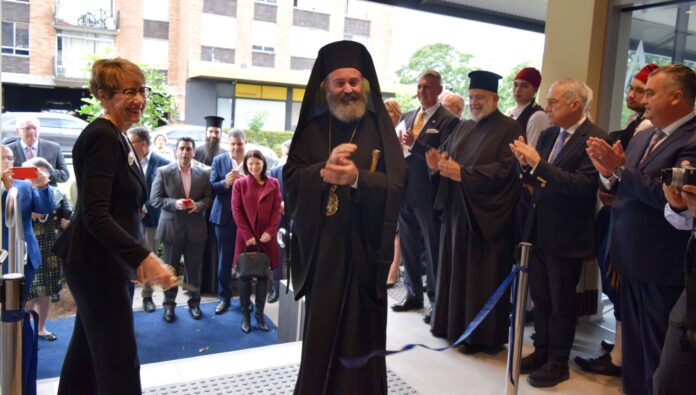 The Castellorizian Association of NSW’s new home, ‘The Castellorizian’, was officially opened on Saturday with the cut of a blue ribbon from Archbishop Makarios and NSW Governor Margaret Beazley.

Master of Services John Mangos, who is of Castellorizian heritage, welcomed all attending honourable dignitaries and Greek community leaders to the private grand opening, saying how proud he was that himself and all other Kazzies “finally have a home again.”

Prior to the afternoons proceedings, NSW Governor Margaret Beazley was presented with a special Castellorizian badge from the Secretary coordinator of History and Archives, Victoria Kazaglis Gallagher. The gift was pinned on Her Excellency in the new cultural centre, where the Castellorizian Association costume exhibit was on display.

“This place, just as your island, is very much about community,” Her Excellency said in her speech.

“An island off the mainland… but whose community actually reflects its stunning beauty. Why do I say that? Because you are a stunning and a beautiful community.”

Following the NSW Governor’s speech, His Eminence Archbishop Makarios performed a formal blessing for the new building. The Archbishop expressed gratitude for being in Australia, where functions and community gatherings such as these are able to be held.

“I believe in my experience that Australia is not only a society, but a communion.”

Association President George Pizanis gave extensive thanks to all community and support members who stood by the Association’s side during the extensive process of building a new Castellorizian home.

“There was an idea to bring together a group of passionate, remarkable people, to see if we could rebuild an organisation that closed in 2010. Driven by determination, strength and a love for the Castellorizian community,” Pizanis said.

“The goal: To bring together all Castellorizian friends in NSW to a hub which we can call home. Kingsford being the optimum place as the island of Castellorizo and Randwick Council have been sister cities since the club’s inception.”

“As you can see we have built an incredible beacon for our community and for all of us to share.”

Konstantinos Giannakodimos, representing the Consul General of Greece in Sydney, said since the arrival of the first Castellorizian migrant in the 19th century, they have become one of the wealthiest and most prosperous Greek communities.

John Barbouttis, a former President and current board director of the Association, also spoke about their strong, ever-lasting connection with the Greek island.

Official proceedings concluded with the unveiling of a plaque by the Archbishop and Her Excellency, as well as a separate plaque by the Castellorizian Association board members.