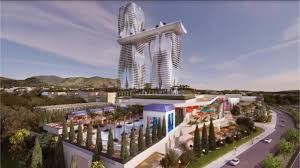 One of the two bidding companies for the Casino at Hellinikon project, the Mohegan Gaming and Entertainment in collaboration with GEK TERNA, presented at INSPIRE Athens on Tuesday.

INSPIRE Athens is the idea for the first integrated touristic casino complex (Integrated Resort and Casino – IRC ) in Greece.

The building complex is drawn its inspiration from the Acropolis and the Caryatids.

Mohegan said that the project will help launch a new era of tourism development and economic prosperity for Greece and the entire region.

Inspired by the Acropolis and the Caryatids

The building’s flagship design is a creation of Steelman Partners, an international architectural firm specializing in the design and construction of IRC complexes.

The inspiration for the architectural design comes from Greece’s architectural past, and in particular from Athenian statues and buildings, including the Acropolis and the Caryatids.

“We realized that the purpose of INSPIRE Athens is to symbolize more than just an integrated hotel complex,” said Marios Kontomercos, President and CEO of Mohegan Gaming and Entertainment.

“We hope that INSPIRE Athens will become the catalyst that will fuel the development of the entire Greek region in the sought after Athenian Riviera, and redefine Greece’s modern identity forever.”

With state-of-the-art facilities that will make Athens a leading MICE (Meetings, Incentives, Conferences, Exhibitions) destination, a multi-purpose, indoor event and impressive pools and waterfronts, INSPIRE Athens will combine luxury hospitality and endless entertainment in a way that no other has never been to Southern Europe before.

Much of the complex was designed to take advantage of Greece’s preference for outdoor activities, so almost all restaurants, bars and nightclubs will offer both indoor and outdoor experiences. Dining areas and shops will include internationally recognized brands as well as popular Greek products that emphasize traditional Greek customs.

The goal of INSPIRE Athens is to make a point of reference in Southern Europe by organizing music concerts with artists from international venues, theatres, major sporting events, as well as other high quality artistic and cultural activities on a weekly basis.

Mohegan Gaming and Entertainment Chairman and CEO Marios Kontomercos, presenting the IRC plan, said: “We hope we have the opportunity to make our vision a reality and that with this hospitality destination – a landmark we will raise Athens as the ultimate tourist destination. ”

The development of INSPIRE Athens is estimated to create more than 7,000 jobs in the area during and after construction, including direct and indirect jobs.

Completion of the IRC is expected to increase international tourism in the Attica region by at least 10% and contribute millions of euros annually to both the Greek state and its citizens in the form of taxes, levies and improvements to infrastructure and services.