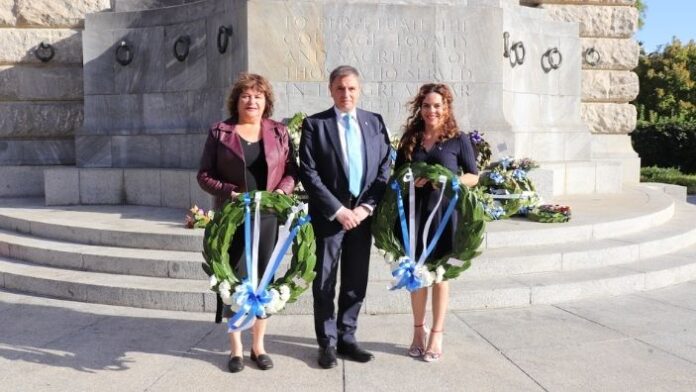 Bonaros and Pnevmatikos took the initiative to organise this ceremony as they claim the Greek Orthodox Church intentionally did not invite them to the event, held at the National War Memorial at North Terrace on Sunday March 21st while other politicians of Greek heritage were present.

Ms Bonaros, whose family’s roots are seeded in Greece’s Peloponnese region, said not receiving an invite was “deeply hurtful”.

“If I’m to believe the rumours, it is extremely disappointing organisers of an important cultural event like that … chose to politicise it,” Ms Bonaros said.

Both politicians received correspondence from Archbishop, Makarios Griniezakis, urging them to not support the SA abortion law reforms that they both voted in favour of. The letter has been obtained by The Greek Herald.

“The War of Independence celebrations are important for all Greeks whether they live in Greece or abroad. To ignore our local politicians was inappropriate and unacceptable.

“Could it be that this omission, was deliberate and somehow a punishment from the church in terms of our position on Abortion Law Reform,” said Ms Pnevmatikos.

“Whilst we all have differing views; we need to be mindful of the differing views and opinions that exist. However, there is not place in our state parliament for church-made legislation.

“Let us not return to a system that existed in Greek society under Ottoman rule,” Pnevmatikos said.

The Greek Orthodox Archdiocese of Australia was contacted by The Advertiser and declined to comment.

The historic legislation also allowed for abortions after 22 weeks and six days’ gestation, if two medical practitioners both agree it is “medically appropriate”.