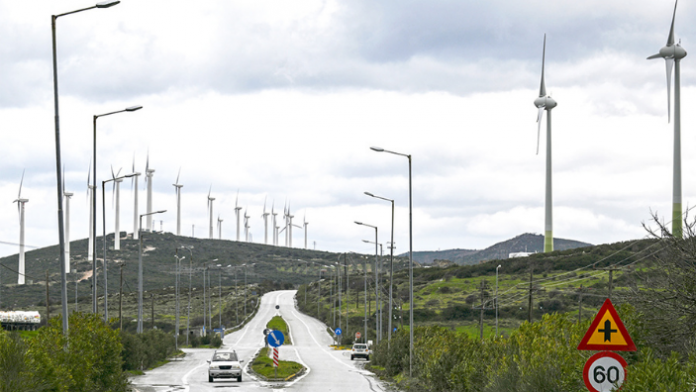 It was only a few years ago that the seaside village of Agii Apostoli on the island of Evia in Greece was enjoying a simple life drawing modest income from tourism and fishing.

Today, the once-peaceful village is ringed by towering wind turbines whose night lights and whirring sounds are equivalent to daily “torture,” locals say.

“Why did you allow this crime to take place?”

The island of Evia, which is 80 kilometres east of Athens and the second largest island in Greece after Crete, was one of the first of the country’s regions to host wind farms almost two decades ago.

Since then, the turbines have multiplied, mainly in the less populated areas of the island. In the local municipality of Karystos, more than 400 turbines envelop the land with some of them even along the main roads.

Local employee, Stamatoula Karava, told local media: “long-term visitors ask us, why did you allow this crime to take place?”

Chryssoula Bereti, who chairs the Karystos anti-wind farm front, says the oldest turbines have now fallen into disuse although no plans to remove them and recycle their parts have been made.

“It’s a scandal,” she exclaimed.

In line with the EU clean energy targets, Greece has reduced its once-overwhelming reliance on lignite for electricity production to around 10 percent.

Forty percent of Greek power plants are now gas-fired and 30 percent run on renewable resources, of which 18 percent are wind turbines.

With its predisposition for high winds, the island of Evia is a natural location for wind farms, but critics say that the expansion has gone too far.

In response to the mounting criticism, the Mitsotakis government last month announced that six mountain ranges in central Greece, the Peloponnese, Crete and the island of Samothrace would be given additional protection status against future energy instructed development.