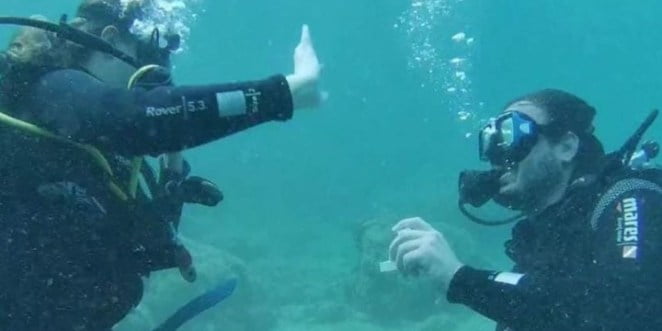 Happiness comes in waves, or in this case, it came underwater after a proposal took place in the biggest Natural Sea Park off Alonissos: Underwater.

Wearing diving gear, Vangelis and Aphrodite dived 3 meters towards the new underwater museum, accompanied by the chairwoman of the Tourism Committee of Alonnisos, Maria Agallou.

While he couldn’t exactly get on one knee, Vangelis upheld tradition by opening a small box with the ring, proposing to his bride-to-be. To get the message across even more clearly, Vangelis held up a sign assumed to read ‘Will you marry me?’.

Being underwater, Aphrodite was clearly left speechless and simply responded with an ‘a-okay’ simple, which people can only assume to be a yes.

The underwater marriage proposal was made with the consent of the mayor of the island and the event was organised in cooperation with Triton Diving Centre.

The underwater museum, a trove of fifth-century BC amphorae labelled the “Parthenon of shipwrecks”, is located off the coast of Alonissos island in the western Aegean. The site recently opened to tours by certified amateur divers this week, running until October 2.