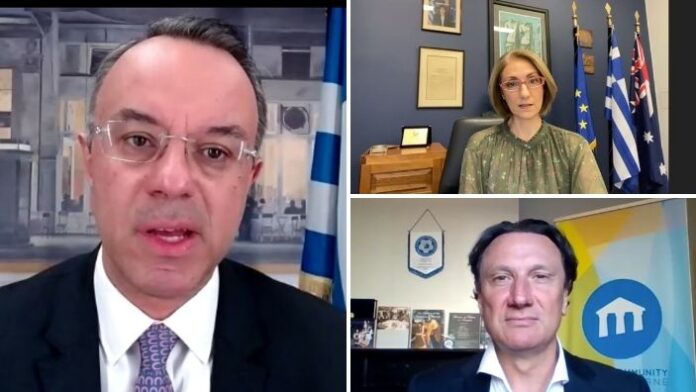 Mr Staikouras discussed the ways Greece had been handling the COVID-19 pandemic while simultaneously building their public health system and business landscape.

“In Greece, the government has been dealing with a health crisis and its impact to the best of its ability, swiftly and efficiently, as has been recognised internationally,” Mr Staikouras said.

“With a coherent, methodical and dynamic plan, we have strengthened public health, supported households and employment, boosted business liquidity, and safeguarded social cohesion with measures totalling 24 billion euros in 2020, and traditionally 11.6 billion euros for 2021.”

“We have launched the ‘village program’ for small and medium businesses. This program will provide a subsidy for most of the business loan instalments for a period of eight months, in order to support businesses hit by the COVID-19 outbreak,” he added.

The Minister laid out the Greek government’s developments in the digital space. More specifically, in easing the administrative burden for the household enterprise. This was asked upon further by Director of Public Policy at Mastercard in Asia-pacific, Chris Siorokos, who asked how Greece’s digital transformation will help broaden the tax space.

Asked what he wanted his legacy to be as a Finance Minister, Mr Staikouras had one simple answer.

“I always exercise my duties guided by my country’s and citizens’ interests. As for what I would like to leave behind is a productive, strong, extroverted and internationally competitive and strong economy.”

The well attended event was hosted by Paul Nicolaou, Director of the Australian Chamber of Commerce and Industry Business Leaders Council, and Katia Gkikiza, Trade Commissioner of Greece. In attendance was also the the Ambassador of Greece to Australia Mr George Papacostas.

The Trade Commissioner revealed that in 2020, amid the pandemic, the total volume of trade in goods between Greece and Australia increased by 12.5 percent.

“To put this in perspective I would like to point out that in the same year, the total volume of trade between the European Union 27 member states in Australia fell by 8.4 percent,” Gkikiza said.

A closing statement was made by Greek Community of Melbourne President Bill Papastergiadis, who said the Greek-Australian diaspora “stands by Greece” and eagerly awaits the opening of international borders, so that the bilateral relationships can be expanded.

“I noted that the Minister’s address was not just ‘simply words’ as, today the Eurogroup issued a statement congratulating Greece on the success of its structural reforms. Hence the Greek Government’s proposed reforms have in fact been translated into action,” Papastergiadis concluded.