Turkish vessels to resume survey activities in the East Mediterranean 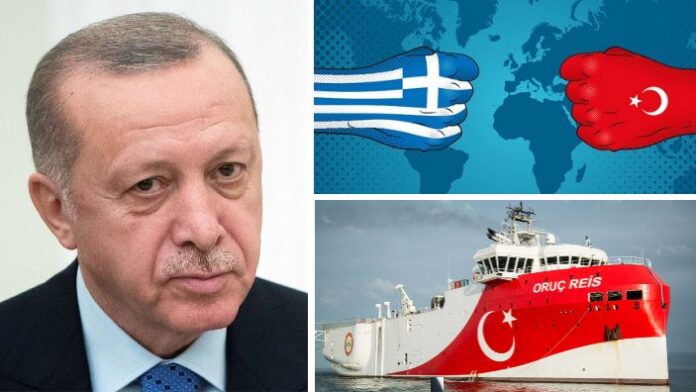 Just a few days before the planned visit to Turkey by Greek Foreign Minister, Nikos Dendias, Turkish Energy Minister, Fatih Donmez, has announced that drilling rigs and survey ships will “soon” return to the Eastern Mediterranean.

“The Oruc Reis is continuing its seismic surveys off the coast of Antalya [in southern Turkey], the Barbaros has gone for long-term maintenance and is in the shipyards in Tuzla, while the Yavuz drillship is completing the procurement of supplies. They will soon return to their planned work in the Eastern Mediterranean,” Donmez said.

READ MORE: Foreign Ministers of Greece and Turkey to meet on April 14 aiming to ease tensions.

At the same time, Turkish Defense Minister, Hulusi Akar, accompanied by the leaders of the air force, navy and army, visited the island of Imvros on Friday.

According to Turkish media, this was the first time the Turkish defense minister together with the entire command of the armed forces visited Imvros, and it was for this reason seen as an important move, given the island’s strategic location in the Aegean.

At the same time, it emerged on Friday that a Turkish Coast Guard vessel crashed twice into a Greek naval vessel in an area near the eastern Aegean island of Lesvos six days ago.

Kathimerini has confirmed that the incident occurred at night, when, during a patrol by the Greek boat in the sea area east of Lesvos, it was rammed by the Turkish vessel, causing minor damage. A similar incident took place in January in the area of the ​​Imia islets.

Meanwhile the tension was palpable on Friday morning on the Greek-Turkish sea border near Lesvos, where increased migration flows were recorded.

More specifically, between 2 am and 7 am six boats with about 300 migrants in total set sail from the coast of Turkey to Lesvos. Sources from the Hellenic Coast Guard said six Turkish Coast Guard vessels were moving in the wider area but did not try to prevent the migrant boats from entering Greek territorial waters, while in three cases they even tried to facilitate them.

Sources from the Hellenic Coast Guard told Kathimerini that they located the six migrant boats before they crossed into Greek waters and notified the Turkish Coast Guard, which eventually picked them up.