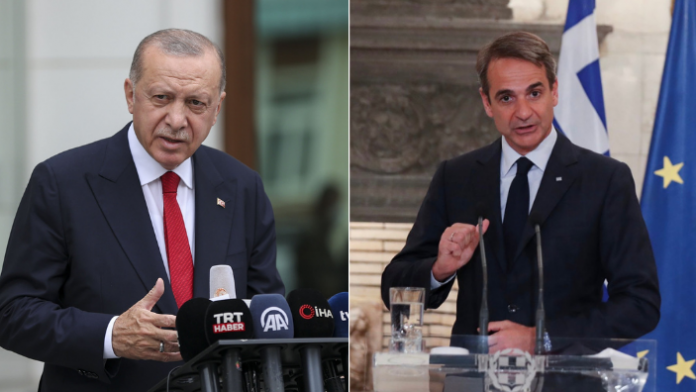 Turkey has accused Greece of lying about migrant pushbacks.

Turkish President Recep Tayyip Erdogan made the accusations on  Thursday during a visit from Hungarian Prime Minister Viktor Orban.

“It is Greece condemning refugees to their deaths in the Mediterranean and Aegean Seas,” Erdogan said during a televised news conference, adding he had proof.

“It is ungrateful for [Greece] to say that Turkey is the source of the problem while our country is hosting 5 million refugees.”

He slammed Greek Prime Minister Kyriakos Mitsotakis for “lying” and “not behaving honestly”.

Mitsotakis claimed on Tuesday that Turkey is “instrumentalising migration”.

“Rather than putting the blame on Greece you should put the blame on those … pushing people in a desperate situation from a safe country, because I need to remind you that people who are in Turkey are not in danger,” Mitsotakis said.

“We have a tough but fair policy in migration.”

Mitsotakis has been under fire recently over the alleged pushbacks.

The Prime Minister got into a heated exchange with Dutch journalist Ingeborg Beugel after she accused him of lying about the pushbacks.

The Council of Europe’s Human Rights Commissioner, Dunja Mijatović, called for the Hellenic Coastal Guard to end pushbacks in May.

“These reports need to be investigated,” she said.

Share
Facebook
Email
Twitter
Pinterest
Linkedin
WhatsApp
Viber
Print
Previous articleAndreas Υannopoulos launches ‘The Greeks are Back’ to attract foreign investment to Greece
Next articleGreek communities of VIC, SA, NSW and SAE call for a Department for the Greek Diaspora