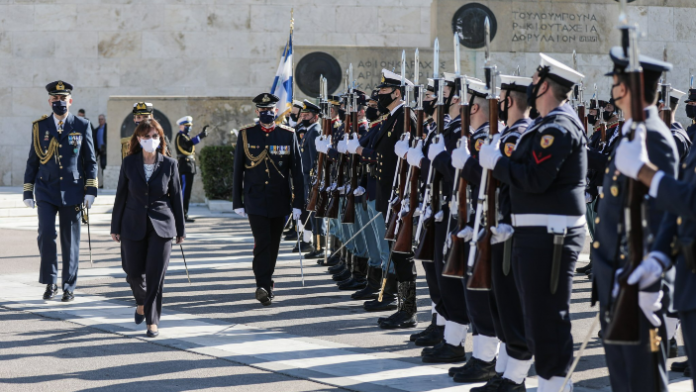 Sakellaropoulou participated in a Doxology at the Church of Agios Dionysios Areopagitos to celebrate the special day and then laid a wreath at the Monument of the Unknown Soldier in Athens.

“With feelings of gratitude we celebrate the day of the Armed Forces. We honour those who gave their lives for the homeland, the unknown soldier who sacrificed himself for our freedom, the men and women who defended our national independence by land, sea and air,” the Greek President later wrote on Twitter.

For his part, Mitsotakis also released a statement on social media to commemorate Armed Forces Day.

“The men and women of the Armed Forces serve selflessly in all of our country’s fronts! Tireless guardians of our national security, but also guardians of the everyday prosperity of our citizens,” he wrote.

“Your dedication to our national duty fills us with pride! Thank you!”