Kyrgios through to third round at Wimbledon, Sakkari kicked out 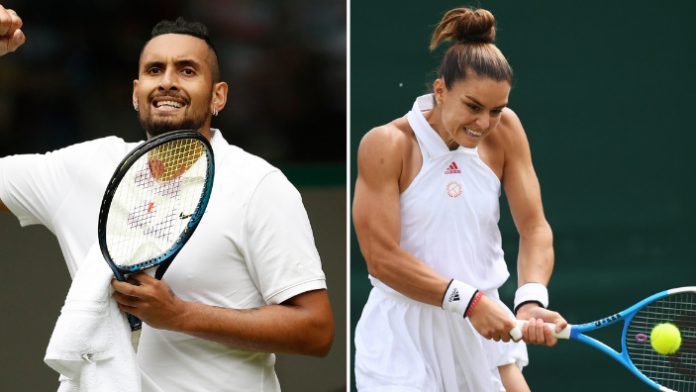 Nick Kyrgios is into the third round at the Wimbledon while Maria Sakkari marks an early exit after being kicked out in the second round.

Nick Kyrgios advanced to the third round after beating world No. 77 Gianluca Mager 7-6 (9-7) 6-4 6-4 last night while women’s world No. 15 Sakkari succumbed to unseeded Shelby Rodgers’ intensity.

Sakkari lost to Rodgers 5-7, 4-6 after the pair battled it out for almost two hours.

Maria Sakkari is packing her backs back home for Australia from London on the fourth day into the tournament, following a triumphant run in the French Open last month.

Sakkari’s match with Rogers was suspended due to darkness on Wednesday after the first set.

Kyrgios has dealt better luck than Sakkari, reaching the third round at Wimbledon for the fifth time in his career, with the exception of Wimbledon’s choice of grass courts for this season.

“It’s not even real grass!” he yelled to the crowd at 5-5 in the first set. “I don’t know if you know this, but on grass it’s supposed to slide away. Now it just pops up, it’s ridiculous. Make it real grass! Jesus,” he said from the court.

“They’ve made it slow. This isn’t grass anymore. This is slow. Slow. Try watering it. Make it a grass court again, thanks.”

Grass courts favour certain styles of play and tend to be slippery and difficult to play on.