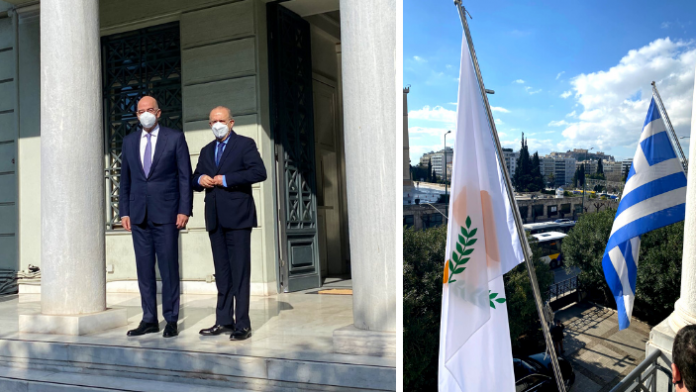 The newly appointed Foreign Minister of the Republic of Cyprus, Ioannis Kasoulides, met with his Greek counterpart, Nikos Dendias, on Wednesday in Athens.

In statements after the meeting, Kasoulides said he and Dendias had the opportunity to exchange views on a wide range of issues, including bilateral relations, the Cyprus issue, addressing Turkish challenges, and the deepening of multilateral cooperation formations.

With regards to bilateral relations between Cyprus and Greece, Kasoulides said they were clear and unambiguous.

“Cyprus and Greece maintain an automatic coordination and consultation mechanism. Both on national issues and on issues on our European and regional agenda,” he said.

The pair also reviewed the prevailing situation in the turbulent geographical basin of the Eastern Mediterranean, “where Cyprus and Greece remain stable pillars of security and stability.”

“Our cooperation with other states in the region, starting with Egypt and Israel, has expanded and now extends to a very wide geographic spectrum,” the Greek Foreign Minister said about the geopolitics of the Eastern Mediterranean, adding that the 3+1 framework (Greece, Cyprus, Israel, and the United States) is a milestone of multilateralism.

Dendias also assured Kasoulides of Greece’s support for the reunification of the island as a bizonal, bicommunal federation, calling it a “fair and sustainable solution.”

After this meeting between the two Foreign Ministers, Kasoulides also met with Greek Prime Minister, Kyriakos Mitsotakis, and the Greek President, Katerina Sakellaropoulou.

Mitsotakis congratulated Kasoulides on the assumption of his duties “after two previous, long and, by all accounts, successful terms.”

Kasoulides reprised his role as Cyprus’ foreign minister after Nikos Christodoulides resigned on January 11. Greece was his first official stop since taking office.