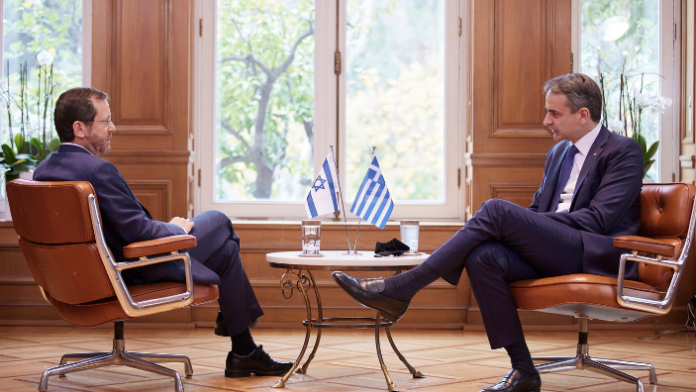 After laying a wreath at the Tomb of the Unknown Soldier in Athens, Herzog held a working meeting with Sakellaropoulou at the Presidential Mansion.

At the start of the meeting, Herzog addressed recent developments in Ukraine, calling the crisis a “historic moment, and a very complicated one.”

“Israel, as our government has communicated, supports Ukraine’s territorial integrity,” Herzog stressed to the Greek President.

“We are, of course, concerned for the fate of the Jewish community in Ukraine, and we shall offer every possible humanitarian cooperation to the government of Ukraine in partnership with and together with other partners.”

The two leaders then went on to stress the strong bond between Greece and Israel.

Sakellaropoulou stressed how both countries “have a strategic relationship” and “common vision for security and stability in the region.”

Herzog thanked Sakellaropoulou for welcoming him to Greece and extended an invitation to visit Israel, praising the “friendship and bold partnership” between the two Mediterranean countries.

Later, the Israeli President met with Greece’s Prime Minister and “discussed bilateral policy, defense and economic relations, the progress of tripartite cooperation schemes and the Russian attack on Ukraine.”

After wrapping up his state visit to Greece, Herzog is scheduled to head on March 2 to Cyprus, where he is to meet with Cypriot President Nicos Anastasiades, followed by an “expanded bilateral meeting.”

Herzog is also expected to visit Turkey in early March.