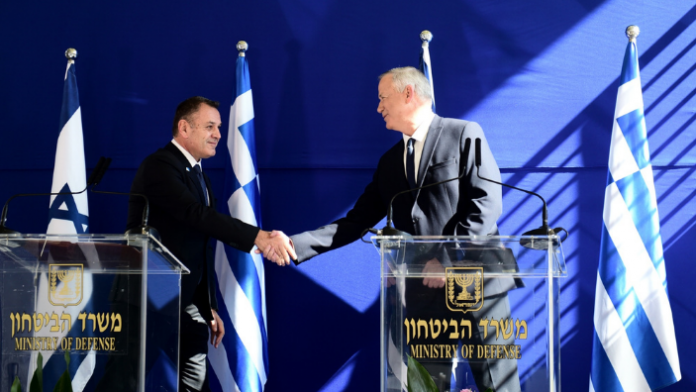 Greek Defence Minister, Nikos Panagiotopoulos, met with his Israeli counterpart, Benny Gantz, on Thursday at the Israeli Ministry of Defence.

During a joint statement after the meeting, Gantz stressed the continued co-operation of the two Eastern Mediterranean countries based on “common interests and values.”

“There is a great potential for expanding Israel’s cooperation with its old and new friends in the fields of energy, innovation, and security,” the Israeli Defence Minister said.

“We will continue to act in this spirit and strengthen the tripartite framework between Israel, Greece, and Cyprus.”

For his part, the Greek Defence Minister added that the close ties between Israel and Greece are based on a number of shared strategic interests and a “common vision… to create a stable, secure, and prosperous environment in the wider Eastern Mediterranean region.”

“Our common goal is to expand and deepen the defence cooperation between Greece and Israel, which has reached an extremely high level in recent years, let me say, of unprecedented development that can be assessed in tangible terms,” Panagiotopoulos said.

The Greek Defence Minister is currently on an official visit to Tel Aviv, where he had successive meetings with his Israeli counterpart and the Patriarch of Jerusalem Theophilos III.