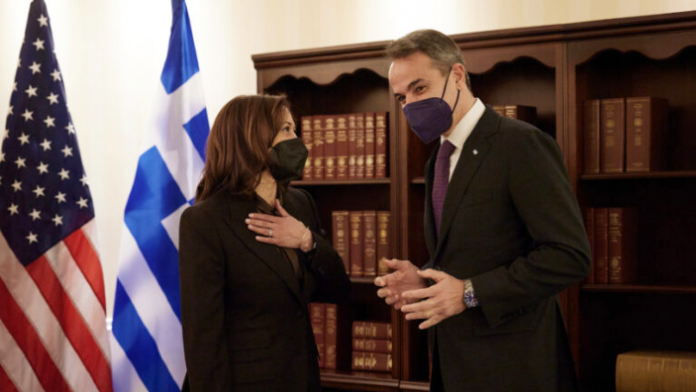 Greek Prime Minister, Kyriakos Mitsotakis, met with US Vice President, Kamala Harris, on the sidelines of the Munich Security Conference on Saturday evening.

Local Greek media have reported that the two discussed all bilateral issues and agreed that relations between Greece and the United States “are at the best level ever.”

According to a press release from the Prime Minister’s office, Mitsotakis informed Harris that the Greek Parliament will ratify the revised Mutual Defence Cooperation Agreement between the two countries in the coming weeks, and discussed with her prospects for more mutual defence projects.

The defence deal, which was signed on 2 November 2021, greatly expands the scope of the US military presence in Greece, including a base in Alexandroupolis.

On the Greek-Turkish front, Mitsotakis briefed the Vice President on developments in the Eastern Mediterranean and stressed the risk of destabilisation due to the escalation in Turkish provocation.

Recent developments in the ongoing Russia-Ukraine crisis were also discussed.