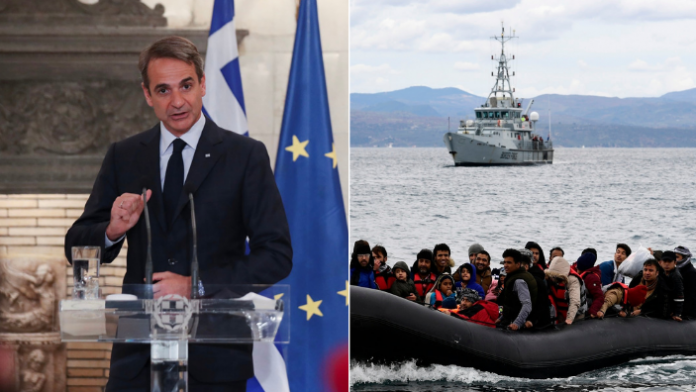 They say they prevented the dinghy’s entry, and the Turkish guard eventually picked up the migrants after initially refusing to do so.

“(The video) shows, beyond any doubt, the clear attempts by Turkish coast guard craft, using dangerous maneuvers, to direct the dinghy that they are escorting towards Greek territorial waters so that they could illegally enter,” a Greek coast guard statement said.

“The European Union must exert much greater pressure on Turkey to comply with its international obligations,” he said.

Thousands of people fleeing conflict or poverty in the Mideast, Africa, and Asia try to enter Greece every year from regional rival Turkey. Under a 2016 agreement with the European Union, of which Greece is a member, Turkey vowed to stem the flow of migrants.

But Greece has repeatedly accused Turkey — which has its own large migrant population — of encouraging and facilitating the attempted crossings. Last year, tension spiked on their land border after Turkey waved thousands of migrants towards Greece and Greece deployed police and military to thwart what it called a “hybrid attack.”

Turkey, in turn, accuses Greece — which has stepped up its border patrols — of illegally sending back migrants who make it onto its territory.

“We are intercepting boats that come from Turkey, as we have the right to do in accordance with European regulations, and waiting for the Turkish coast guard to come and pick them up to return them to Turkey,” he said.

Greece and Turkey, both NATO allies, are also at odds over undersea gas and oil exploration rights.