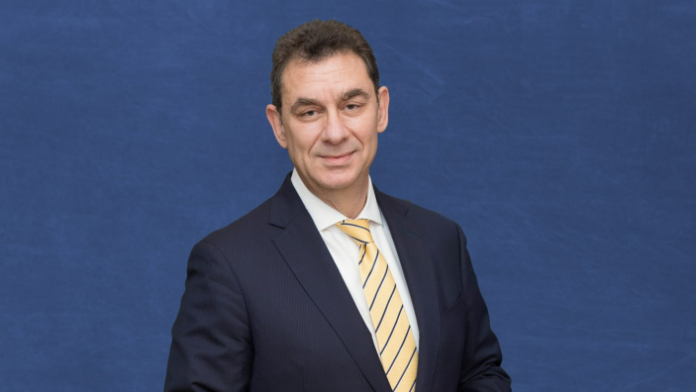 For his journey from Thessaloniki to becoming the Chairman and Chief Executive Officer of one of the world’s leading biopharmaceutical companies, to COVID vaccine equity and his passion to invest in Greek talent, Pfizer CEO Dr Albert Bourla addressed Australia’s Hellenes and Philhellenes on Tuesday, 9 November in an online event organised by The Hellenic Initiative Australia (THI Australia).

In the nearly 60-minutes long discussion Dr Bourla was joined by THI Co-Founder and Global Chairman, Andrew N Liveris AO while THI Australia Director, Dr Helen Zorbas opened the fourth of the digital conversation series which aim to celebrate outstanding members of the Greek Diaspora who share a passion for Greece.

“We are who we are because of our experiences,” said Dr Bourla referring to his heritage before he went on to talk about his upbringing, the journey to deliver the first COVID-19 mRNA vaccine and the recent opening of the Pfizer innovation hub in Thessaloniki.

Memories of growing up in Thessaloniki

“I was born and grew up in Thessaloniki and this is where I studied.”

“I was playing in the city’s main squares and I have great memories from my childhood,” Dr Bourla said and shared with the audience the story of his Jewish parents, who were among the 2,000 survivors from a community of 50,000 nearly eradicated in the Holocaust.

“The experiences of the environment and the family you grow up in puts a stamp in your life…the family is fundamental to who you will become in life.”

“I was very much into the Greek culture to start with. All my life until now I was not one who would listen Rock’n’Roll. I was listening Rebetika…I am in love with the Greek culture,” the CEO said and explained how the hardships his family went through equipped him with resilience and optimism.

“I try to see the glass half full rather than half empty,” he stated.

A Greek immigrant on a mission to save humanity

Asked about the tipping points that opened up a way to an international career, Dr Bourla identifies the move from Thessaloniki to Athens as the first one and later on the relocation to Brussels to pursue a promotion.

“Since then, I have lived in eight different cities and five different countries. Very big part of my career was the fact that I was exposed to different cultures,” said Dr Bourla highlighting that his family’s support has been instrumental.

Referring to the Pfizer’s success and his book entitled ‘Moonshot’ that describes the behind-the-scenes story of how the company raced to create the first Covid-19 vaccine, Dr. Albert Bourla credited his team that made “the impossible possible” by testing and manufacturing a safe and effective vaccine that previously would have taken years to develop.

“Pfizer’s success wasn’t due to luck; it was because of preparation driven by four simple values—Courage, Excellence, Equity, and Joy,” he said.

“The world was facing something that nobody thought we would. Everything was collapsing. Then I thought, if not us then who? We did not have an option to not do it.”

“Equitable access is very important to me and needs to be for everyone,” said Dr Bourla.

“I know there is a lot of discussion about whether we [Pfizer] did well or we succumbed to pressures from high income countries. There is a lot of misinformation, so let me set the record straight.”

“We provided the vaccine to high income countries to the cost of a take away meal. This is how much we charged. A fraction of what a COVID test costs to these countries. And we priced it like that because we knew we would have way less than people would like to buy,” he said.

“Only the high-income countries placed orders and that became a concern to me.”

Dr Bourla said that when some of the countries that in the beginning put their bets in producing their own vaccines ended up turning to Pfizer.

“We made a deal with the Biden administration and we will give them a billion doses at cost that they can only give for free to the world’s 93 low-income countries.”

Referring to the vaccine rollout he said that the most possible scenario will be an annual revaccination.

Prompted by Mr Liveris regarding the way different governments approach to the vaccine rollout, Dr Bourla clarified that “Australia didn’t place orders with Pfizer in the beginning so all doses were allocated. I think they bet to another vaccine that was going to be manufactured in Australia. Then they came back to us. Now they have vaccines.”

Investing in the Greek youth

Talking about Pfizer’s digital innovation hub in Thessaloniki Bourla said it has nothing to do with philanthropy or his ties to the country.

“We see an opportunity to have access to great, talented people,” he said.

“I want to emphasize; this is not a gift we made to the country because I am Greek.”

“The last decade many young people had to leave not by choice, like me, but they were forced to go. I knew that and I also knew that if I took the bet the people would not disappoint me.”

From the 550 employees currently working in Thessaloniki’s newly launched hub 15% are Greek professionals who used to work abroad and repatriated, 70% are locals and the company plans to hire 150 more in the near future.

Referring to Greece’s future Dr Bourla says that the country is on its way to financial recovery that seems to be based on stronger foundations and encouraged businesses and individuals to explore investing options.

In his message to the audience he said “let’s all try to do the best we can where we live but never forget the ‘patrida’ (home country).”