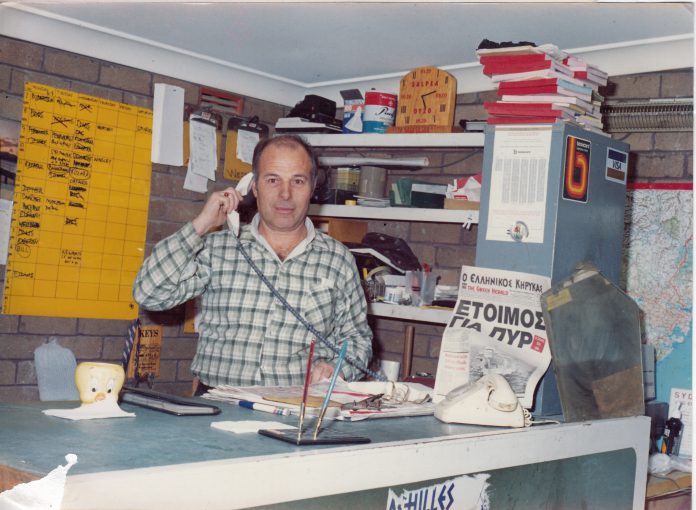 A few decades ago, in what now seems a very different world and before the multinational companies and franchises, there were some very successful businesses run by very charismatic and energetic characters. They just had the knack for business; their entrepreneurial skills seemed to be innate. Moreover, they had an x factor that distinguished them from others- the flair, the confidence and the gift of the gab.

Kefalas Hardware had such a wide variety of products on offer to customers; as Jerry Mitzinis, who grew up in Marrickville, points out, ‘‘Before Bunnings, there was Kefalas Hardware.’ But it was Giorgos Kefalas’ quick- witted nature and innate gift for business that that made ‘Kefalas Hardware’ so successful.

Listening to Giorgos recounting his experiences in Marrrickville, you quickly realise he is one of the great storytellers of the Greek community; you just have to keep up with all his stories.

From Asomatos, Lesvos, Giorgos migrated to Sydney, Australia, in 1960; his first job was as a renderer to render the Acropolis kafeneio in Redfern. In 1961, he married Stavitsa (nee: Marnisali), from Perama, Lesvos, and they had two children, Mario and Efstratios (Charlie hereafter).

It was Mick Adams, who once ran the pioneering Black and White Milk Bar, that introduced Giorgos to John Walton, of Waltons department stores, and he was offered a job in Waltons as a salesperson in the Newtown store. Within six months, he was promoted to manager of the paint section – a big thing for a migrant those days! He worked at Waltons for nine years (1961- 69). For years, Giorgos was practically running the store; not wanting to lose his services and contacts, he opened Kefalas Hardware next door- with a door linking Waltons and the new hardware shop!

Continually advertising in the Greek newspapers and radio programs, Kefalas Hardware’s name entered so many Greek households; as Giorgos recounts, he had customers ordering from Canberra and NSW south coast! It was so busy that Giorgos employed seventeen workers- not including Stavista (and later his two sons, Mario and Charlie) at one time!

An example of Giorgos’ enthusiasm and energy was when he had a banner placed across Marrickville Road, as he recounts, ‘Back then, Marrickville was abuzz! In 1974, I paid to put up a long banner that went from my hardware shop to Marrickville Hotel which read, ‘George Kefalas Wishes the Greek Community Merry Christmas and a Happy New Year’. As I was very good friends with Singapore Airline’s CEO, Mike Hadley, I got Singapore Airlines to sponsor the banner!’

After an arson attack in 1982, which burnt the hardware shop as well as a number of other businesses, Kefalas Hardwaremoved to Illawarra Road, which was formerly the School of Arts.

The Kefalas family ran the hardware shop there until 1996…

Giorgos has many fond memories of this bygone era; he still visits Marrickville a few times a week and seeing so many familiar faces makes him feel at home!