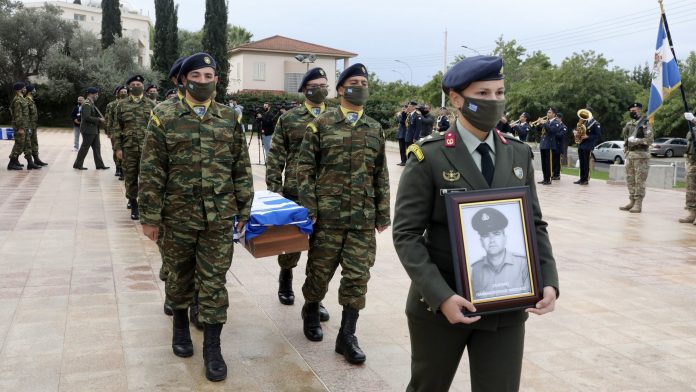 The remains of seven Greek soldiers who lost their lives during the Turkish invasion of Cyprus in 1974 were returned to Greece Thursday.

Their remains were loaded onto a C-130 military plane at Larnaca airport with their relatives and Greek defence minister Nikolaos Hardalias in attendance.

“I am here to receive my brother’s remains and take them back to Greece,” said Angeliki Karagouni, sister of reserve warrant officer Charalambos Karagounis, who was among the seven.

“I am very moved, but also proud, that my brother is a hero.”

Karagouni last saw her brother when she was 14 years old. She said his absence has been painful ever since.

“I learned that the remains I’m getting show he was taken as a prisoner, abused and executed.”

“I feel proud to be taking my brother home to his birthplace,” she said.

Relatives of the soldiers received medals of honours at the ceremony.

Six of the soldiers were stationed in Eldyk, the Hellenic Force in Cyprus, and the seventh in Noratlas, the military aircraft shot down in Nicosia.

Presidential Commissioner Photis Photiou said 77 other Greek citizens on their list remain missing, with 47 unaccounted for.