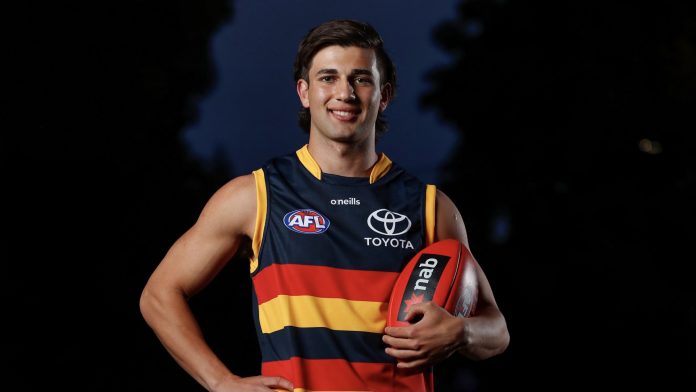 Josh Rachele is a young footballer on the rise.

The Crows selected Rachele on Thursday as pick 6 in Wednesday night’s AFL draft.

Rachele, 18, is a Greek-Italian-Australian from Shepparton and tells AFC Media the Crows are now his “second family”.

“To see how welcoming the Adelaide Crows are, my family is very comfortable with me heading here,” Rachele said.

“They were all very proud and happy for me and it was good to spend that moment with them,” Rachele said.

“They’ve been massive and very influential over the past few years and I am very grateful for them.”

Rachele’s father, of Italian heritage, works on the family’s third-generation commercial orchid in Shepparton, while his mother is Greek.

“Every single year we make tomato sauce with all my uncles and cousins,” Rachele said. “Then we make salami as well – they are the two big traditions that we keep going.”

“I’ll definitely bring some of my sauce down for sure.”

Rachele is keen to head to West Lakes and get stuck into pre-season.

“I think I can bring that spark and excitement to the Crows but there’s a long way to go yet,” he said.

“I just want to earn the respect of my teammates, get settled as quickly as possible, show my strengths and get to know the boys on a better level.”

“He’s exciting and he’s kicked some difficult goals,” Ogilvie said. “He’s good on the ground and in the air.”