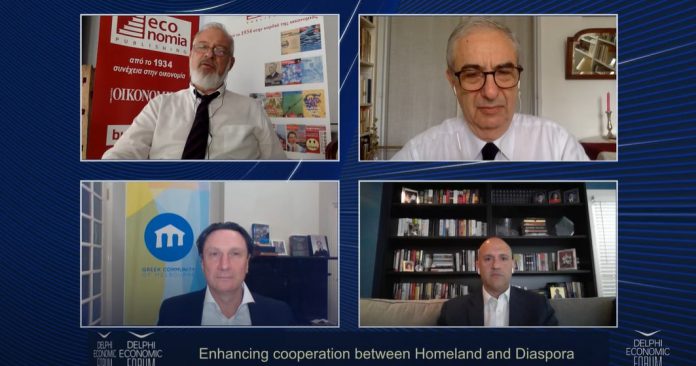 Feature guests took to the stage to discuss ways on strengthening the relations between Greece and Diaspora as part of the 5th Delphi Economic Forum, on Thursday 18 June.

The discussion was held in English and featured:

During the discussion, a number of issues related to Diaspora’s cooperation with Greece were discussed, as well as proposals for improving these relations in the future.

Four issues were of main consideration during the panel:

According to Mr Papastergiadis, it was predicted that the Greek Diaspora in Australia would shrink numerically and culturally as a result of the termination of Greek immigration post 1974. However, following the economic crisis and collapse of the Greek economy, there has been a huge repatriation of the Greek-Australian Diaspora back to Australia.

It is estimated by Dr A. Tamis, that there are approximately 80,000 Greek-Australian citizens that returned to Australia and 10,000 Greek settlers on various visas.

“The Diaspora in Australia is not homogenous, Melbourne is different to Sydney – for example – those born in Greece differ from their children and then they differ from those who have married into other ethnicity,” he said.

“There is no homogenous national identity. Equally, there has been a change of view about the Greek homeland. That yearning for the return to Greece is no longer related to a melancholy story of loss and decay. Hence, the idea of belonging has changed over a period of time with the recognition of cultural differences.”

Mr Papastergiadis believe’s that now is the time to move forward in developing the relationship between Greece and Australia. “In Australia, the politicians and policy makers know that the Greek Diaspora is good for business,” he said.

“In Australia and particularly in Melbourne, the Greek community is considered amongst the strongest if not the strongest ethnic group. It stimulates trade, provides links to foreign markets and expanded services for the community. The government provides and funds festivals and numerous cultural and educational programs.”

Referring to the meeting held in July 2019 with Prime Minister Mitsotakis, Mr Papastergiadis discussed the issue of postal vote from Diaspora.

Discussing the importance of the right to vote for Greeks living abroad, Mr Papastergiadis emphasised that:
“A vote means more than just filling out a ballot. It means reflecting and engaging on all issues that relate to your country. It brings you closer to your country. By allowing the vote, Greece will send a message to its citizens that everyone counts. That we are all one. Hopefully this will lead to more engagement both culturally and economically.”