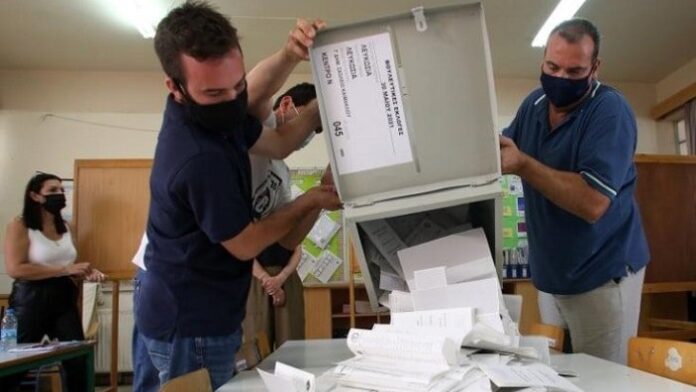 The far-right ELAM party and a centrist splinter group made big gains in Cyprus’ parliamentary election on Sunday as a sizeable chunk of supporters appeared to have turned their back on the top three parties amid voter disenchantment with traditional power centers.

The centrist DIPA — made up of key figures from the center-right DIKO party which has traditionally been the third biggest party — gained 6.1% of the vote.

The center-right DISY emerged in first place with 27.77% of the vote, 5.4% more than second-place, communist-rooted AKEL. But the parties respectively lost 2.9% and 3.3% of their support from the previous election.

“The result isn’t what we expected,” AKEL General-Secretary Andros Kyprianou told a party rally. “We respect it and we’ll examine it carefully to draw conclusions, but we can now say that we failed to convince (our supporters).”

Analyst Christoforos Christoforou said the results indicate a “very big failure” on the part of both DISY and AKEL to rally more supporters by convincing them of the benefits of their policies. A last-ditch appeal by the DISY leadership limited a projected 5% voter loss to 3%.

Christoforou said the real winners were ELAM with its strident anti-migration platform and hardline nationalist polies and DIPA whose top echelons still have connections to the centers of political power as former ministers and lawmakers.

“A neo-Nazi party is the clear winner of today’s election, securing two more seats in the 56-member house,” Christophorou, an analyst specialising in electoral behaviour, said.

“It has benefited from a xenophobic climate exacerbated by the high rate of arrivals of undocumented migrants and a government that has often adopted its own racist narrative.”

Christoporou said that the high electoral threshold of 3.6% means that 15,000 voters who cast ballots for smaller parties who didn’t win any seats are left without a voice in parliament.

Opinion polls in the weeks preceding the vote indicated that both DISY and AKEL would hemorrhage support as disappointed voters seek out alternatives among smaller parties.

The election won’t affect the running of the government on the divided Mediterranean island nation, as executive power rests in the hands of the president, who is elected separately.

About 65.73% of nearly 558,000 eligible voters cast ballots for the 56 Greek Cypriot seats in parliament. Voter turnout was 1% less than the previous poll.

Among the key campaign issues were the country’s handling of the COVID-19 pandemic and the hoped-for economic reboot as the country ramps up vaccinations. Migration has also been an issue as the Cypriot government insists it has exceeded its limits and can no longer receive more migrants.

Smaller parties have appealed to voters to turn their backs on DISY, which they said is burdened by a legacy of corruption.

An independent investigation into Cyprus’ now-defunct investment-for-citizenship program found that the government unlawfully granted passports to thousands of relatives of wealthy investors, some with shady pasts. DISY bore the brunt of the criticism because it backs the policies of Anastasiades, the party’s former leader.

Christoforou said there are questions as to whether the government has breached rules by using state funds to campaign for DISY.