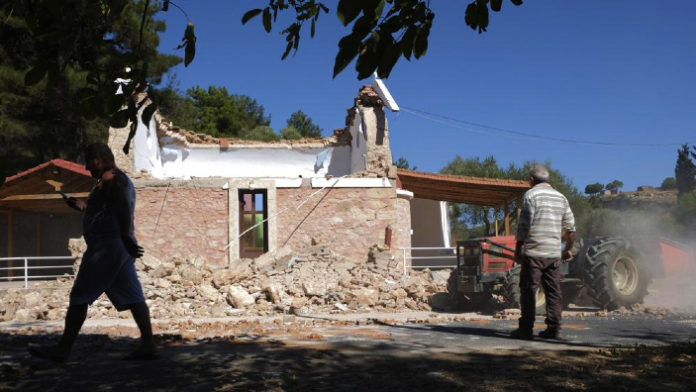 Greek authorities set up tents for the homeless residents of the village of Arkalohori in southern Crete on Monday evening, after an earthquake registering 5.8 on the Richter scale killed one person and injured 20.

The majority of the old buildings in Arkalohori sustained heavy damage and were deemed unsafe. Tents were also set up at villages along the municipality of Minoas Pediadas, where hundreds of homes have been damaged.

The Athens Geodynamic Institute said the 5.8 magnitude quake struck at 9:17 a.m, with an epicenter 246 kilometers south southeast of the Greek capital, Athens.

READ MORE: On This Day: The 1956 Santorini earthquake and its devastating aftermath.

The quake sent people fleeing into the streets in the city of Iraklio, and schools were evacuated. Repeated aftershocks — described by witnesses as feeling like small explosions — rattled the area, adding to damage in villages near the epicenter.

Of the 20 people treated for injuries, ten of them received first aid according to hospital officials.

Greece’s Climate Crisis and Civil Protection Ministry said one man had been killed. He was pulled from the rubble of a partially collapsed church in Arkalochori, authorities said.

Local media said the victim was a 65-year-old builder who had been working inside the church when the roof collapsed on him.

Government spokesman, Giannis Oikonomou, said there were no reports of people missing or trapped under rubble.

Climate Crisis and Civil Protection, Christos Stylianides, arrived at the area on Monday afternoon, heading the team that oversees the reconstruction work. He declared a state of emergency in the area.

Numerous aftershocks struck the area, with the EMSC giving a preliminary magnitude of 4.6 for the two strongest.

Greece lies in one of the most seismically active parts of the world, but strong quakes that cause extensive loss of life or widespread damage are rare. In 1999, an earthquake just outside Athens killed 143 people.