On This Day: The 1956 Santorini earthquake and its devastating aftermath 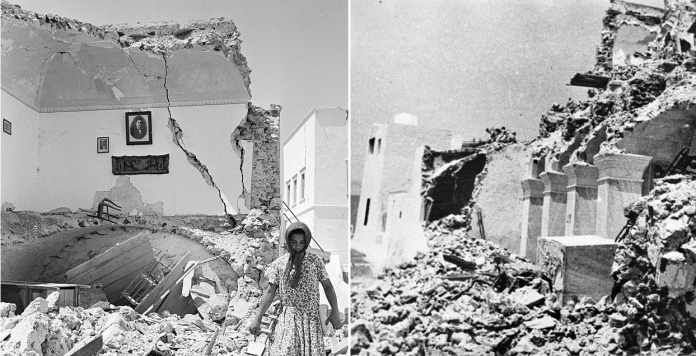 The date is July 9, 1956 and Santorini is as beautiful as it has always been with its white and blue adobe buildings perched on the caldera cliffs. The markets are filled with venders eager to sell their fresh produce. To any regular native of Santorini this seems like another day of business and enjoyment.

But then, without warning in the early hours of the morning, disaster struck. Santorini was hit by a 7.5 magnitude earthquake, the largest to ever be seen in Europe in the 20th century. It was followed by a tsunami 25 meters high.

At least 53 people were killed and more than 100 were injured. 35 percent of the houses collapsed and 45 percent suffered major or minor damage. Almost all public buildings were completely destroyed.

Such devastation led to a huge internal migration of the population of Santorini, mainly to Athens.

Apart from Santorini, the islands of Amorgos (the epicentre of the earthquake), Anafi, Astypalea, Ios, Paros, Naxos, Kalymnos, Leros, Patmos and Lipsi were also severely damaged. A total of 529 houses were destroyed, 1,482 were severely damaged and 1,750 were lightly damaged.

The quake tested the state machinery, which had not yet recovered from the 1953 major earthquakes in Zakynthos, Cephalonia and Ithaca.

Many countries offered to send aid to relieve the earthquake victims. The only country whose help Greece refused was Great Britain, perhaps because of the Cyprus problem, which was then on the rise with the EOKA uprising.