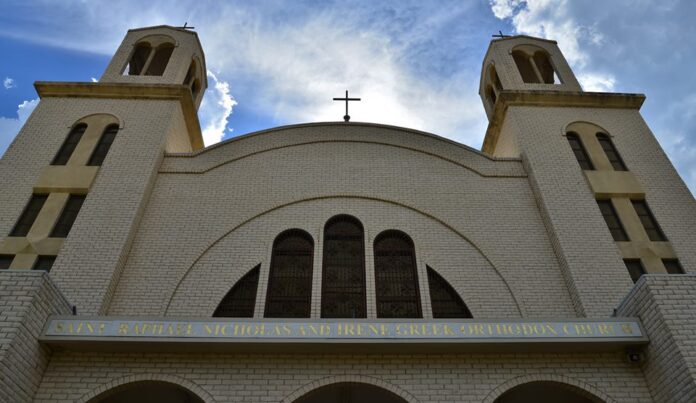 The Greek Orthodox Archdiocese of Australia has released a statement calling for the president and Committee members of the Parish-Community of Saints Raphael, Nicholas and Irene in Liverpool to step down, closing the church indefinitely.

See the Archdiocese’s full statement below:

Much to the disappointment of the Greek Orthodox Archdiocese of Australia, the Committee of the Parish-Community of Saints Raphael, Nicholas and Irene, Liverpool, of which Mr John Rekouniotis is the current president, has in recent years undertaken a series of unlawful acts and decisions. Now, prompted by the appeals of many parishioners, the Archdiocese has been compelled to act so as to bring unity and order to this Parish-Community.

For example, although the Committee is obliged by its constitution to convene a general meeting of its members annually, it has not convened such a meeting for more than eight years. Consequently, the financial reports of the Parish-Community have not been tabled before the members and no elections have been held. In this manner, the president and other Committee members have extended their terms of office for many years and filled casual vacancies of their own accord. At the same time, they have refused to provide to the Archdiocese a current list of financial members, again as required by their constitution. Additionally, they have ignored and disrespected the members of the Trustee Committee which is charged by the constitution with the general oversight of the workings of the Committee on behalf of the members and the Archdiocese.

The Archdiocese has been trying for some considerable time, even through the personal intervention of His Eminence Archbishop Makarios, to communicate with the Committee, with the aim of helping to resolve these issues, reconcile the Committee with the Trustee Committee and, above all, to achieve the convening of a general meeting of members so as to enable the people of Liverpool to decide on a new Committee. Unfortunately, however, the president and the other members of the Committee persist in their hostile stance. For this reason, and following advice from the lawyers of the Archdiocese and the request of many parishioners of Liverpool, the Church will remain closed until the resignation of the current Committee.

For the last time, and publicly now, the Archdiocese appeals to the president and members of the Committee to vacate their offices so that the Community can move forward. We also ask our pious and blessed flock of the Liverpool district to show understanding for the duration that the Church remains closed. In the meantime, our faithful are encouraged to attend church in the nearby parishes of St John, Parramatta and St Euphemia, Bankstown.

*The Greek Herald has reached out to the President for comment.