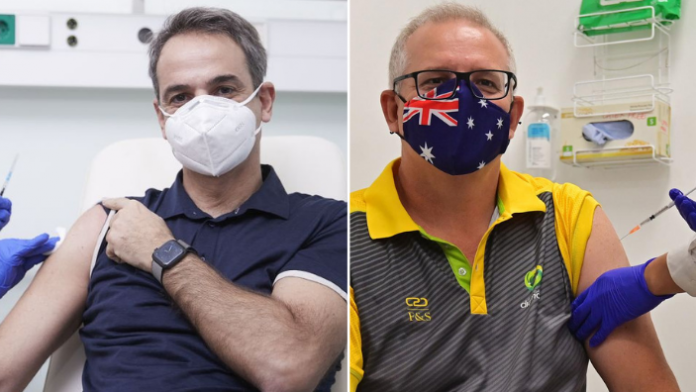 New figures released by Our World In Data illuminates the stark reality of Australia’s COVID-19 vaccination rollout and begs the question: why are we so far behind?

Greece currently ranks 35th in the world in the OWID’s list of doses administered, with 33.91% of its population vaccinated

Greece has fully vaccinated 34.2% of its population, putting itself in the 10th place of a list of countries ranked by their share of the population.

Australia sits in 40th place in the worldwide rank of developed and developing countries with just 4.8% of its population fully vaccinated.

So far more than 7.3 million doses have been administered across Australia – but the health authorities don’t release the age, gender, or location of fully vaccinated Australians, or how many of whom have received both doses.

The federal government’s decision to hold back vaccination data has received criticism from health experts.

Greece places dead centre in a rank comparing the number of doses administered in 32 European countries, but isn’t far off it’s counterparts Portugal, Lithuania, and Italy.

Vaccine hesitancy is rife in both countries, experts say.

Greece is combating the hesitancy by offering incentives and rewards for those who make the switch to receive the jab, while Australia’s vaccine program has been mired by narrow supply and mixed messaging.

Three billion doses of the COVID-19 vaccine have been administered worldwide.