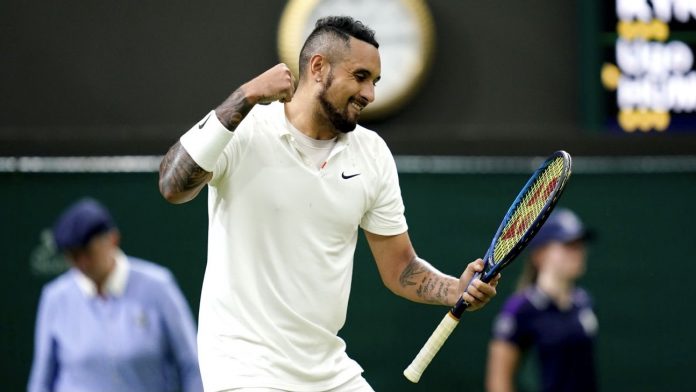 Nick Kyrgios is set to make his Olympic debut and has emerged in Wimbledon after a five-month hiatus to begin a tense match with Ugo Humbert.

Nick Kyrgios has been announced to headline tennis at next month’s Tokyo Games alongside 10 other players, including Australians Alex de Minaur and women’s world No. 1 Ash Barty.

The Canberran will join John Millman, James Duckworth, Sam Stosur, Ajla Tomljanovic, and a few others in July.

Kyrgios formerly withdrew from the Rio Summer Olympic Games in 2016 at the peak of his career as Australia’s No. 1 tennis player over a spat with the Games’ Chef de Mission Kitty Chiller.

“AOC’s unfair and unjust treatment of me over the last four weeks… has solidified my final decision,” Kyrgios said at the time.

Nick Kyrgios also beat French No. 21 Ugo Humbert 3-3 in the fifth set before play was suspended by a tournament referee because of an 11pm curfew.

Kyrgios hasn’t played for nearly half the year since the Australian Open, where he beat Humbert in a five-set thriller, but that didn’t deter his confidence.

“I know for a fact that no one here wanted to play me first-round and I feel completely confident going into this match,” Kyrgios told reporters.

“I’m not saying that I’m the favourite, but I know how to play on grass.”

Source: The Daily Telegraph, The Australian